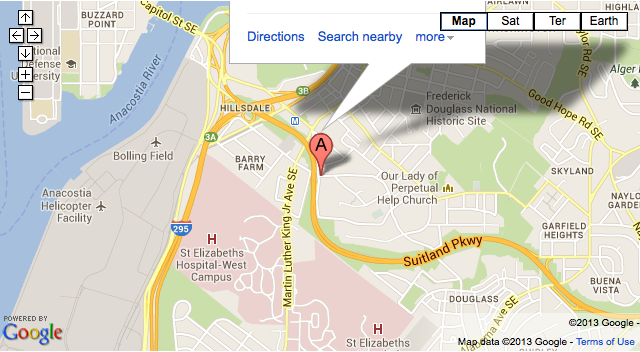 Google and the Google logo are registered trademarks of Google Inc., used with permission

On Sunday morning we learned that four people were shot in the 2600 Block of Stanton Rd, SE. A reader comments:

“It is the reactions and post-mortem that stand out in my mind. It’s not so much that, just after sunset Saturday night on busy Stanton Rd. on the way back from the Giant that my car, at about 20 mph, ended up in the midst of some fore-to-aft crossfire between some teenagers who can’t shoot straight. Two bullet holes decorated my rear windshield, which did a good job of absorbing a lot of the energy, shattered like Bonomo Turkish Taffy.

My reaction was shock at first, then appreciation for the windshield’s dampening the bullets. The police assigned to examine for evidence had a callous attitude. When they arrived at 1 am and started examining the contents of my car without telling me, I came out and chatted with them about the news that four people had been injured in the shootings. I expressed the hope that none of the injuries were serious. One of the officers said, “Serious to them, but not to me.” Another officer tried to incorrectly explain to me that a bullet shot from a distance would have far less momentum and not be as likely to travel far after penetrating a window. I started to explain that traveling through the air doesn’t significantly retard a bullet’s velocity, but I thought better of it. As it turned out, the heater-lined rear windshield rendered each bullet as fragments, and I wasn’t in as much danger as I could have been in front of a plain glass windshield.

After thinking about my situation, I thought the Washington Post might be interested that my car was shot twice. I left my phone number with a reporter, but no one has called back. I have previously documented that the local news media have little interest in the travails of folks who live in Ward 8. I suppose I shouldn’t regret the lack of special attention because I am white. I live in Ward 8, so I don’t count for as much as someone in Ward 3, where I used to live.

My students took my brush with violence in stride. Students I spoke to in three different neighborhoods all heard shooting last night; the difference was no one apparently was hit, or at least no one called the police. They all know family members or friends who have been shot; it is part of life in Ward 8. One of my students owns a gun; he assured me he only uses it for special occasions. I told him he is much more likely to die because e owns that gun than otherwise. I have been told by more than one student that I need to get a gun.

The Seventh Police District overlaps much of Ward 8. However, the piece of land that covers Anacostia High School is part of the Sixth Police District. There is virtually no way for the police to get to know the young people in the community. They, and the community at large, write off the teenage Jesse Jameses as punks not worth our time or energy. There is no effort to steer middle school kids to make right decisions. During the winter, Metro was just about to reroute a key commuter bus away from Wellington Park because of the violence there when the police finally admitted that they might be able to help the Metrobuses navigate the route safely. Middle school kids were throwing rocks at the buses, and no one in the community was stopping it.

In the 60′s and 70′s, the catch phrase was, “Give a Damn.” Can we, please? Can we write about what we see and hear, even if it might not sell papers or attract viewers? Can we stand up to the callousness of government institutions like the police? Can we band together as neighbors and try to talk to our youth instead of letting them go every weekend to do what they want?”