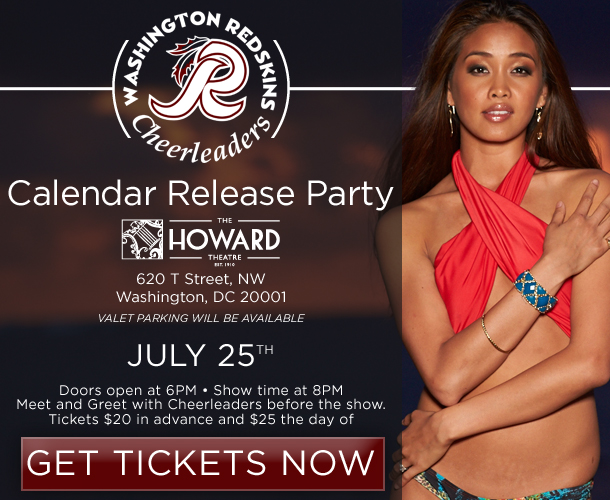 “The Washington Redskins Cheerleaders announced today their 2013-2014 Calendar Release Party, which includes all 36 members of the squad, will take place on Thursday, July 25 at the Howard Theatre (620 T Street NW). Doors open at 6 p.m. Show starts at 8 p.m.

Fans will have the opportunity to get their own copy of the calendar and have it autographed by the entire team. The First Ladies of Football will be available for photos and autographs. Additionally, Cheerleaders will be mingling with the crowd and V.I.P.’s in attendance prior to the start of the show.

The First Ladies of Football Calendar Release Party is the only event where fans and corporate partners have the chance to spend time with the entire Washington Redskins Cheerleading team. The Cheerleaders will perform a 30 minute show and Redskins Broadcast Network will show a portion of the “Beauties on the Beach” show that will air on Comcast SportsNet.

“Working with the Washington Redskins Cheerleaders is a great partnership for us,” said Steven Bensusan, CEO of Blue Note Entertainment, owners and operators of The Howard Theatre. “Pairing with the city’s most prominent and legendary sports franchise underscores the special role that The Howard, like the Washington Redskins, have played in the history of this city.”

Fans interested in attending the Washington Redskins Cheerleaders Calendar Release Party can purchase tickets here. Space is limited. Packages and discounts are available for large groups of 10 or more people (subject to availability).”