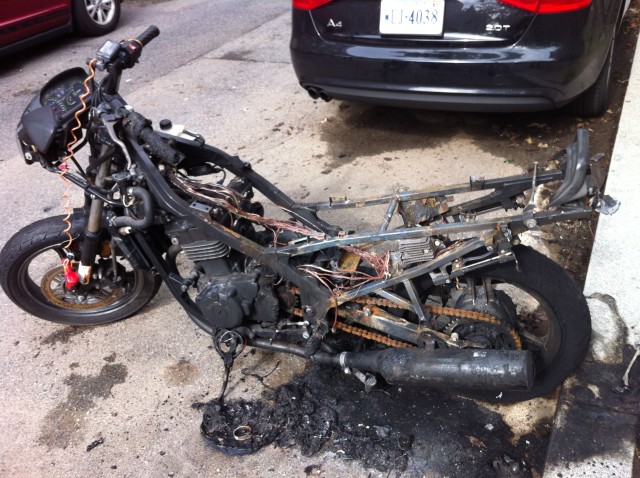 Two weeks ago around 3am Sunday morning somebody torched my Kawasaki Ninja 500 motorcycle, parked over by the old Italian embassy at 16th and Fuller. It was a 20+ year old beater I’d been repairing, covered with a tarp, so maybe someone was ticked off that they took a risk uncovering it only to find I had the tank, seat, and carb off that week.

Cops came out, CSI took some pics; they were pretty impressed because you don’t see a lot of motorcycle arson in DC, more just theft. The officer admitted there wasn’t really anything to be done about it, but gave me the case number for insurance. I had Comprehensive through Geico with a $500 deductible because most companies don’t want to ensure motorbikes in DC. Go figure.

Even with the deductible I still came out for around what I paid for it, the only problem is I still want to have a motorcycle, but not really inclined to just park it on the street again. In 18 months in DC I’ve had a Honda 250 Nighthawk stolen, the Ninja was knocked over twice while parked on the curb (not sure if vandals or just careless parkers) breaking off a lever here and a mirror there. And just a month before the arson someone stole the $30 cover off my motorcycle (for kicks? for $5 of crack?) so my current one was bike-cabled to the frame.

Anyone have a better idea of how to secure a motorbike in Columbia Heights? Is there any parking garage that rents space out that has a small section for bikes? Any way to find out who’s got spare garage space? Or should I just get the cheapest dual sport (street-legal dirtbike) I can and just chain it to a post or railing on the sidewalk or alley like the Vespas and mopeds do? It’s just frustrating that short of paying sky-high rent to move into a new yuppie fortress with underground parking, having a bike in DC requires a willingness to just shrug off vandalism and theft. Bikeshare still rocks though.”

more stories
Previous
Props to the Cops – Arrest Made in Assault with the Intent to Commit First Degree Sexual Assault while Armed and Burglary: 2400 Block of 2nd Street, NE

Next
Ray’s the Classics Given to two Employees to become ‘The Classics’ in Silver Spring?