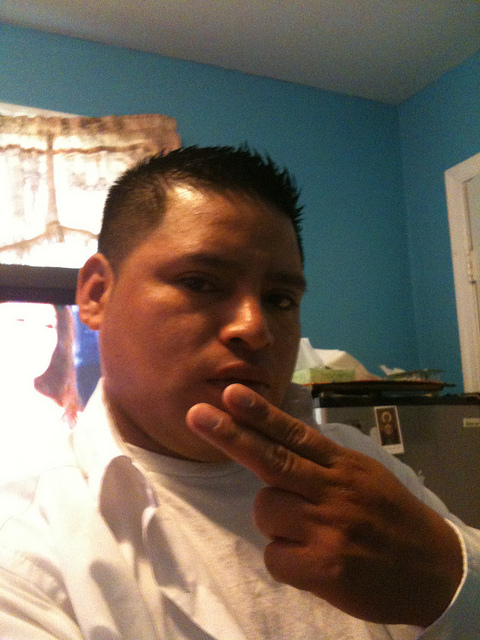 The Columbia Heights Listserv has circulated a photo of an alleged burglar or his associate who took a self portrait from the victim’s phone. I asked for more info from the victims of the burglary and this is what they say:

“Our place was broken into Friday afternoon or in the middle of the night. We’re in a row house in Columbia Heights near 11th.

On Saturday afternoon, we realized a laptop and binoculars were missing, and my iPad and an old iPhone I used as a desk clock were also missing. Sigh. This is the second time in the last year. (We were burglarized last November – busted in door, TV yanked off the wall, missing assorted electronics.) One theory is that this time the burglars used the brand new ladder we had just purchased the previous weekend to come in through an unlocked window.

Fast forward to yesterday, Wednesday, when I noticed a few pictures on my iPhone photostream that I hadn’t taken. I used the Lab app on my current iphone to figure out that these photos were taken with a 3GS (my old phone) on Tuesday afternoon. Two snaps of an iPad (probably mine?) and another iPhone. Oh, and a selfie of some guy I don’t recognize. The burglar? The fence? The customer? The prayer card in the background is a nice touch.

So that’s what we know. I filed a police report online. If anyone recognizes this guy, they can call the MPD Anonymous Tipline (202) 727-9099 or email me at hthomly(at)gmail.com.”