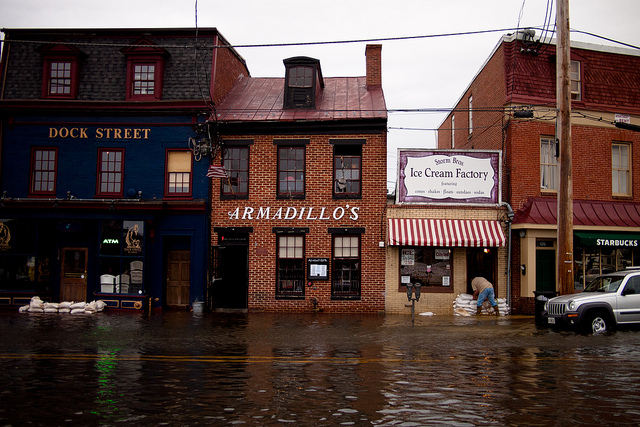 “I own a row house south of H Street NE that has a basement. In the last 14-15 months, the basement has flooded every time DC has had a really hard rain. I believe the problem at first was that the drain at the back door of the basement was clogging. We fixed that and did not see any flooding for nearly a year, until a few weeks ago. In the last two weeks, the basement has flooded three times. The first time, there was about an inch of water in the back half of the basement. The last two times have been pretty minor. The water seems to be coming up from the middle of the floor, through the laminate flooring, and always starts in the back of the basement and spreads from there.

I had a plumber come out to investigate because I was worried about a groundwater problem or a leaking pipe. He told me that groundwater would have come through the whole apartment, not just consistently the bedroom in the back. We suspected that it was a foundation issue on the back wall (there were large cracks in it where it looked like water was coming through), so a contractor repaired that with cement and then applied water proof sealant to the cement. But it then flooded on Friday again. Believing we had ruled out the foundation as the issue, we suspected the cause was a leaking downspout pipe in the back corner of the house. The plumber thought he found a crack in the pipe that was about level with the basement floor, so we diverted the pipe. But yesterday we found water again had come through the middle of the floor after the rain in the morning and afternoon. It’s less water now, but I’m not sure if that’s just because it rained less than it did on Friday and a week or two before that.

At this point, I’m baffled about what’s going on. Is the plumber right, that it can’t be groundwater because it would come through the floor in the whole apartment? Could we have a crack in the cement pad that’s letting water come through? Could it be another leaking pipe (we diverted the downspout to a different drain)? I asked a neighbor after the really hard rain a week or two ago, and she said she hasn’t had any flooding issues in at least ten years. And I haven’t seen any signs from my other neighbors that they’re having flooding issues.