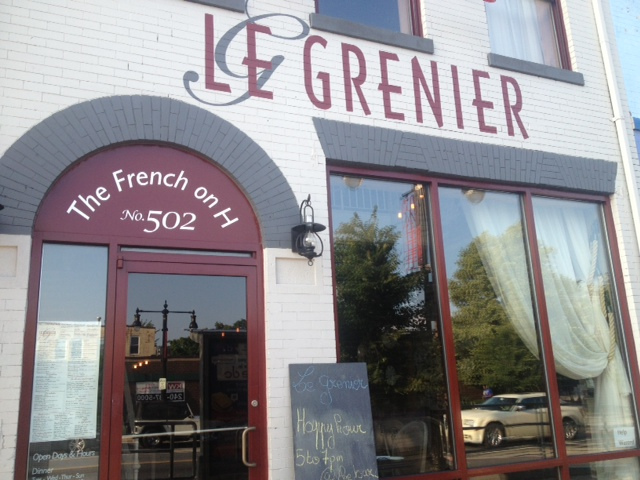 This edition of Eating Around Town was written by Abbey Becker. Abbey previously wrote about Table.

I like McDonald’s French fries–they’re thin, crispy, salty, and cheap. But when I dine at a restaurant that serves French food, I do not expect to be served fries that could have been brought over from the nearest golden arches.

Unfortunately, this meant Le Grenier (502 H Street NE) and I were not going to be on good terms.

But let’s talk about the good parts. I got there earlier than my 7:00 dinner reservation on a Tuesday night, so I took a seat at the bar to wait for my friend. Happy hour runs from 5 to 7 every weekday at the bar, and you can get half off wines and cheeses. The bartender was incredibly friendly and helpful; I told him I didn’t know much about white wine, but that I was interested in something that wasn’t sweet. He had me try a Chardonnay, which I didn’t like, then gave me a sample of another that I liked better. When I had questions about some of the cheeses, he knew what each tasted like, how each was made, and which would go best with the glass of wine I chose. Possibly the best part was that the three cheeses (served with sliced green apples, a sliced strawberry, some nuts, and a lightly dressed mixed green salad) and my glass of wine cost $10.

Two women next to me ordered the three-cheese and three-meat plate, and when it arrived with pate as one of the meat selections, one of the diners wrinkled her nose and said she really didn’t like pate. The bartender offered to swap it out for something she’d like better, like prosciutto. That’s service! 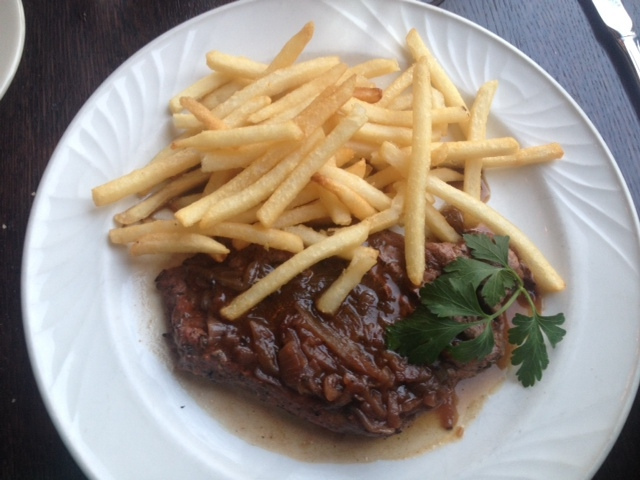 When it came time for dinner, however, the speed and attitude of the service completely changed. The guy delivering the bread (which tasted like spongy supermarket French bread, but at least it was hot) would come by with a basket and tongs and add a slice to each bread plate when we each finished one, but didn’t make eye contact or acknowledge our existence at all. Our main server couldn’t recommend a galette, seemed generally nervous, and mumbled a lot.

In terms of food, my friend ended up with the galette with mushrooms, leeks, and lardons, essentially a crepe with lots of filling. No major complaints about this dish, except that the crepe itself was a bit dense. I ordered the bavette à l’échalote, a hangar steak with fries. I asked for it medium rare, and it was served more medium-well. The steak seemed like it had been sautéed ahead of time, then reheated in a pan that wasn’t hot enough–the outside of it was kind of soggy and limp. And then it was doused with brothy caramelized onions, which tasted vinegary, mostly. If I wanted something that only tasted like caramelized onions, I would have ordered the French onion soup. The McDonald’s-style fries were served on the side.

Yes, the décor was well thought out, but it was completely overshadowed by the rest of the mediocre experience. If the food doesn’t deliver, I’m not coming back. If you want to talk about an amazing and delicious French meal, then let’s go to Le Diplomate.