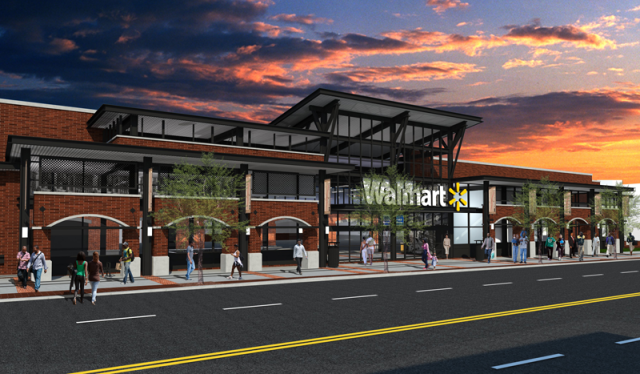 Rendering for store already under construction at Georgia and Missouri Ave, NW

I just read the following article about Walmart’s plans to come to DC.

The company says it will kill plans to open three stores in DC and may kill the current ongoing construction of three other stores in DC if the City Council passes a “living wage” bill, which will require “large retailers” to pay about 50% above minimum wage ($12.50/hr vs. $8.25/hr). Do people think this bill is a good idea?

Mendelson says “[L]arge retailers, that have economic power, earnings of a $1 billion or more, they have the ability to pay a wage that comes out to $26,000 a year. That is not very much.” Isn’t it? And who decides how much is not very much?

And if it’s important for workers to be paid a “living wage,” why not make the requirement applicable to every job in the District as opposed to just “large retailers”?”

The new stores will offer customers a full grocery selection, as well as a full service pharmacy and a wide variety of general merchandise. The size of each store will be between 80,000 and 120,000 square feet, with the first six stores located on:

If the LRAA Passes Walmart Will Not Open Stores at Skyland, Capitol Gateway, and New York Avenue

What’s more, passage will also jeopardize the three stores already under construction as we will thoroughly review the financial and legal implications of the bill on those projects. This was a difficult decision and one we arrived at after considerable contemplation. There is no question that Wal-Mart has surpassed the community relations efforts of other retailers seeking to come to Washington, D.C. In response, some members of the Council are fast-tracking a game-changing piece of legislation that challenges our ability to deliver.