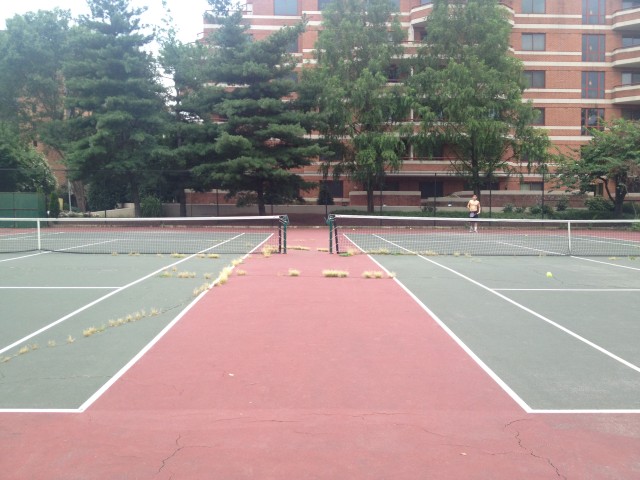 I live near the tennis courts by 23rd and O Street. I think it’s great that they can easily be used by residents of the District completely for free. Moreover, I think so many other people in the community appreciate having them. At the same time, it seems the city could do two small things to make them significantly better.

1. Maintenance
There is little to no effort being put in to maintain the courts. When I started using them years ago there weren’t noticeable surface problems; however, over time, a few courts have developed cracks, and this summer grass started growing through the cracks. Additionally, people periodically leave what seem to be condoms in the fences.

2. Time Limits
Generally, when others are waiting for a court, it is common courtesy to limit your time to an hour for singles and to an hour and a half for doubles. People either don’t know or willfully ignore this. While signs wouldn’t necessarily alleviate the problem entirely, it’d be nice to have something posted that reinforces the idea that these time limits exist.

Any ideas on how to get someone interested in looking into these things?”

Perhaps a general inquiry with DPR dpr(at)dc(dot)gov and/or a tweet to @DCDPR to get things started?