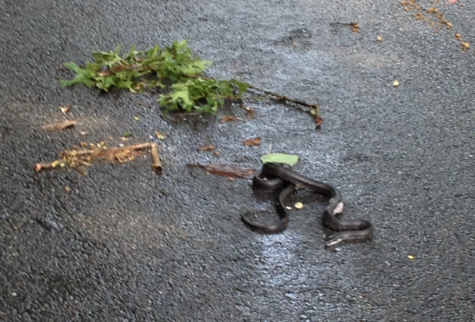 At the end of May we learned the frightening news that snakes were falling out of trees in in Walter Pierce Park in Adams Morgan. Apparently, some snakes have migrated to Cleveland Park. Yesterday afternoon a reader sent the photo above and wrote:

Just saw this guy take the plunge from a tree on Porter Street in Cleveland Park. It was terrifying. Maybe the same kind of snake that was falling from the trees in Walter Pierce Park? It was right below Connecticut, a little after Kim’s Dry Cleaners. It was so bizarre! After it fell it just kind of laid there. I’m not sure if it was dead or if it was freezing like the person in the PoP post said.