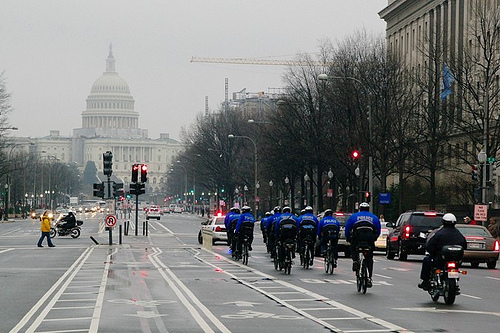 I had an encounter with a DC police officer a few weeks ago and wanted to get some perspectives from PoPville. I won’t get into too many specifics here, but thought someone might be able to help me figure out where to turn.

While visiting me in DC, my mom was knocked to the ground by a police officer. He wasn’t in hot pursuit, he wasn’t responding to a call. It was an accident and clearly his fault, but she seemed unhurt so we picked up and brushed her off. He left. No apology, didn’t stick around to see if there was anything he could do or follow up. Flash forward a few weeks, she’s in pain and the swollen ankle we thought she had, is actually a broken foot, discovered several doctors visits later.

I want to report this guy. I wanted to at the time, but before I had my whits about me, he was gone. I know where I was, what kind of cop he was, when it happened, a general description, his first two initials, and one other thing I think will help — but that’s it. Is there any hope of me ever figuring out who this guy was? Our city is full of great cops who bust their humps, but this guy makes them all look bad.