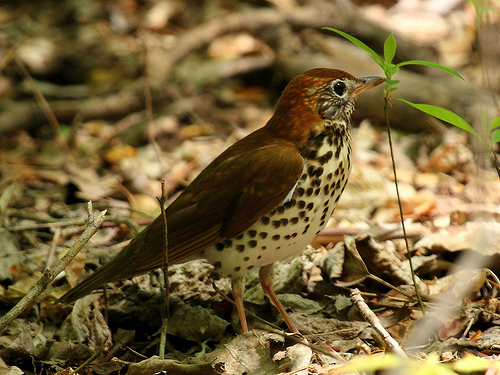 Between April and June, cued in part by increasing daylight hours, migratory bird species turn from their winter territories and travel en masse to spring breeding grounds. In the Washington area, we see migrants returning from farther south: Kentucky warblers from the Caribbean, yellow-billed cuckoos from as far as Argentina. DC’s official bird, the wood thrush, overwinters in Central America and parts of southern Mexico. Not all birds migrate, and some species are only partly migratory: one population may migrate while another stays put. European Starlings are one of these: we have resident starlings all year, but some travel south for the winter. Spring migration is maybe the best time of year to go birding: this time of year, the migrants sport their often-gorgeous breeding plumage, making them easier to see than during the fall migration, and their sheer numbers make the odds better as well.

Most birds migrate at night, navigating partly by the stars and avoiding diurnal predators. Artificial lights, which now blanket most of the Atlantic flyway, appeared only recently from an evolutionary standpoint, and birds don’t recognize them as something to avoid. When birds fly past an illuminated building at night, they are drawn to the light inside, and can fly straight into windows or glass walls, injuring or killing themselves. A similar thing happens during the day when birds see the sky reflected in a building before them, and fly toward it. This can happen at any time of year, but is most lethal during migration, when huge numbers of birds are flying along routes that take them past some of our biggest and brightest cities. Up to a billion birds die this way every year in the U.S. alone.

A simple fix is to turn out unnecessary lights at night, especially in taller buildings. The volunteer-based organization City Wildlife runs a program called Lights Out DC that encourages Washington business owners to do just that. Volunteers for Lights Out (full disclosure – I’m one of them) walk routes downtown in the early morning during migration season to collect dead and injured birds, determining which buildings are the most dangerous. Turning out unused interior lights is a quadruple win – it saves energy and money, reduces light pollution, and protects birds – but like any behavior change, it happens slowly.

To learn more about City Wildlife, or to volunteer, visit www.citywildlife.org.

Ed. Note: We still have a few spots open for Bird Watching on TR Island May 4th. Please email me at princeofpetworth(at)gmail if you’re interested.