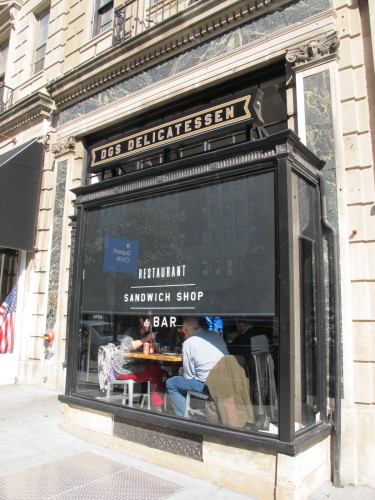 I know this reeks of gefilte-jacking but the menu sounds pretty good. Though not clear if they will provide a surrogate relative/family friend to rant about politics and gossip about which relatives are on drugs… From a press release:

To celebrate Passover, DGS Delicatessen Chef Barry Koslow will offer a modern rendition of the seder, incorporating elements of the traditional holiday meal and adding seasonal ingredients. Koslow adds bone marrow to the matzo balls instead of schmaltz, and the traditional “bitter herb” is incorporated into a crust on halibut, which stands in for the seder staple gefilte fish. The sacrificial lamb is braised and accompanied by a spring bounty of crispy artichokes, peas and carrots, and a modern take on haroset finishes out the meal in the form of an apple, rhubarb and walnut crumble with cardamom ice cream. Beverage director and general manager Brian Zipin has paired each course with complementary wines from around the world, including an Israeli Cabernet Sauvignon and an heirloom Ice Cider from Vermont.

The Passover Menu will be available March 25th through March 31st during dinner for $40, or $60 with wine pairings.

Passover Menu after the jump.

House Made Matzo For The Table