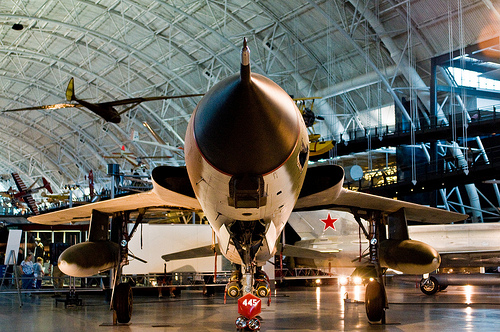 The following was written by Sarah Katz-Hyman. Sarah is a student at University of Maryland and lives in College Park.

I visited some of my favorite museums (only three on this day) and here are my “oldy but goody” exhibits and “new and exciting.” This list is by no means exhaustive, so please share some of your favorite exhibits from these museums and others.

Oldy but Goody: The Wright Brothers & The Invention of the Aerial Age

The Wright Brother’s famous first flight occurred in 1903, and now in 2013 we have another rover on Mars, satellites that are reaching the end of our solar system and the ability to fly cross country in about five hours. This exhibit is classic and humbling to think about just how far flight and technology has come.

New and Exciting: Moving Beyond Earth

Who hasn’t thought about being an astronaut for at least one second (literally everyone has, especially if you just read that). This exhibit helps visitors imagine the life of an astronaut through hands-on stations, live lectures and video.

Note: Although I didn’t go this trip, if you have are able to visit the Udvar-Hazy Center in Chantilly you should definitely go. It’s a huge hanger with a ton of cool and important planes throughout history. Highlights for me are the Enola Gay, the Concorde and of course the Space Shuttle Discovery – all three pieces important to the history of aviation, culture and politics.

Oldy but Goody:  The First Ladies & The Star Spangled Banner

The closest thing we have to royalty, marvel in the fashions of the first ladies. Hoop skirts abound and style reigns supreme. This glimpse into a small part of their lives is fun and another way to put ourselves in the shoes of many steps throughout history.  Oh, and Michelle’s iconic white dress still gets me.

“A little bit of Patriotism every now and again does a man good,” said Benjamin Franklin …not actually. But seeing the original flag that inspired the anthem is awe-inspiring. What is just as interesting is the science behind its preservation. When you are done here you could always head up to Baltimore and visit Ft. McHenry to reenact the whole scene.

New and Exciting: Changing America: The Emancipation Proclamation, 1863 and the March on Washington, 1963

This year is the 40th anniversary of the March on Washington and the 140th anniversary of the Emancipation Proclamation. The two events, separated by a century’s time, are some of the most pivotal in American history. This exhibit takes a look at the events and how they have shaped our nation. When you are done you can walk up to the Lincoln and look down the mall (I am a big fan of imagining myself in historical places). This exhibit is open until September 15, 2013.

This collection about the origins of humans is fascinating. We are a species that is has evolved through unlikely and harrowing means. It’s a great place to start in the museum or a great way to end it. Walking through this exhibit, try to see yourself in all the steps of human history – we have a pretty incredible timeline.

Cute animals and impossibly beautiful pictures combine in this not-so-new but soon-to-be-gone exhibit. This gallery makes animals very relatable and incredibly poignant. One of my favorite activities is to caption the ones with the animals with what they are saying. Also, trying to pick that one picture to go above the (fictional, in my case) fireplace. This exhibit is open until April 7, 2013.

Note: I was pretty pooped after three museums in one day, but for nourishment the American Indian Museum offers up an excellent food court encompassing many of the Native American cultures. The exhibits are also great in my experience but I didn’t check any out this time.

Extra note: In just a few years (projected 2015) the National Museum of African American History and Culture will open and this promises to be another very well curated museum.