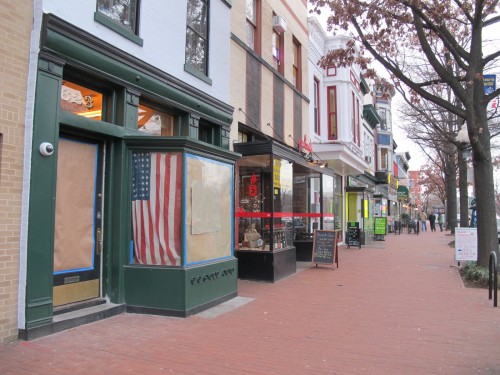 We took a preview back in early Feb. Glad to hear they’re now open! From a press release:

A former saloon-turned-speakeasy with 130+ years of history, Beuchert’s Saloon has just soft opened at 623 Pennsylvania Avenue, SE in DC’s Eastern Market neighborhood. Resurrected by three “Beltway Boys” – Nathan Berger, Brendan McMahon and August Paro – Beuchert’s Saloon has once again opened its doors as a 47-seat restaurant serving family-farmed foods from Executive Chef Andrew Markert and old-fashioned craft drinks in an authentic and inviting environment. Beuchert’s Saloon is now offering 30% off all food now during its soft opening period until its grand opening on Friday, March 15.

A venerable Capitol Hill establishment owned by local businessman John Beuchert and his son, Theodore, from 1880 to 1934, its original namesake and location has now been resurrected as a warm and inviting neighborhood gathering place serving up a “farm American” menu. With produce and meats sourced primarily from McMahon’s family-owned East Oaks Organics Farm in Poolesville, MD as well as other small farms and co-ops in the area, Beuchert’s serves up playful American fare with a creative twist.

Lots of details after the jump.

A highlight of the entire menu is MARKER’S MARKET, devoted to fresh, unique preparations of veggies sourced from the restaurant’s farm. Dishes may include Crispy Brussels Sprouts with marjoram, almond gremolata and vermouth, Cherry Bell Radishes with sea salt, butter roasted pecans and fennel pollen, and Hubbard Squash with nutmeg and crispy sage, and can be ordered individually ($6), or as a trio (3 for $15) to create an entire vegetable entrée.

To accompany main meals, Chef Markert has created COMPANY, his own selection of delectable side items like White Corn Grits with local goat cheddar, Roasted Mushrooms with crème fraiche and shallots, and the Gpod French Fries with sauce ravigote.

To end the meal on a sweet note, TREATS will include playful retro sweets like Bananas Foster Twankies (think: Twinkies with a “twang”) with rum frosting, the Candy Bar with coffee, crunch and chocolate, seasonal Popsicles and Slice-o-Pie, with rotating daily flavors and varieties.

In addition to its regular a la carte menu, Beuchert’s Saloon will offer a Chef’s Table experience on Thursday through Saturday evenings with advance reservations. Chef Markert will create a unique culinary adventure for guests at the six-seat bar, with broad dish categories like “The Root”, “Shelled”, “Swimmingly”, “Ranging” and “Candy.” Reservations are required 48 hours in advance and are available for parties of two to six.

Beuchert’s also boasts a cuisine compatibility-focused beer and wine program, and a classically-crafted cocktail program led by partners Brendan McMahon and Nathan Berger, who have most recently done stints at PS7s, Acqua Al 2 and Rasika. An eye-catching center of the bar is an old-fashioned tap handle dispensing prosecco on draft, while its house cocktails (all $10) will be highlighted by unique, seasonal ingredients, many coming from East Oaks Farm. Boozy sips range from two barrel-aged cocktails – a Manhattan made with rye and a Bobby Burns with Ardmore 12 year, Dolin Rouge and Benedictine – as well as some creative sips like the self-titled Beltway Boys with rye, amaro, Aperol, Peychaud’s bitters and absinthe, and the Jenkins Hill (named after the location of the Capitol) with spiced rum, pear brandy, allspice dram, orgeat syrup and egg white. Beuchert’s will also serve variety of microbrews and large format beers, wines, housemade sodas and an extensive coffee program.

In resurrecting this neighborhood mainstay, the current Beuchert’s Saloon owners have gone to great lengths to not only maintain the incredible history of the building but to restore it to its original glory, handling most of the build-out themselves. Partner and designer (and former film set designer) August Paro meticulously recreated period-correct fixtures and finishes, giving every aspect of the restaurant extensive attention to detail – including the handcrafted bar, turn-of-the-century tiled bathrooms and two 1920s hand-blown chandeliers from Europe. All interior details in the current 47-seat restaurant (plus 20 outdoor garden seats when the weather warms) are inspired by and reflective of the amazing history of this long-standing Capitol Hill establishment.

ABOUT BEUCHERT’S SALOON
Beuchert’s Saloon is located at 623 Pennsylvania Avenue, SE Washington, DC and is a history-rich neighborhood restaurant and saloon, serving up a real ‘farm American’ dining experience in the Eastern Market neighborhood of Washington, DC. Sourcing the majority of ingredients from its owner’s family farm in Maryland, Beuchert’s serves playful American fare with a creative twist led by Executive Chef Andrew Markert. Beuchert’s also boasts a cuisine compatibility-focused beer and wine program, and a cutting-edge craft cocktail program. A warm and inviting gathering place, Beuchert’s Saloon pays homage to the location’s original saloon of the same name, owned by John Ignatius Beuchert from 1880 to 1934.