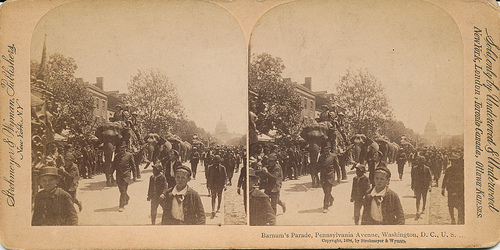 The Metropolitan Police Department wishes to advise the public of road closures associated with the Annual Ringling Bros. and Barnum & Bailey® Elephant Walk scheduled to occur on Tuesday, March 19, 2013 at 8:00 pm. The streets will begin closing at 7:30 pm and re-open at 10:00 pm.

The Elephant Walk will proceed from Capitol Hill to the Verizon Center.

The walk will form at the New Jersey Avenue and Virginia Avenue, NW (Capitol Power Plant)

The route is as follows:

Motorists and pedestrians are urged to use caution when traveling in this area due to heavy pedestrian, vehicle, and bus traffic in the above areas.