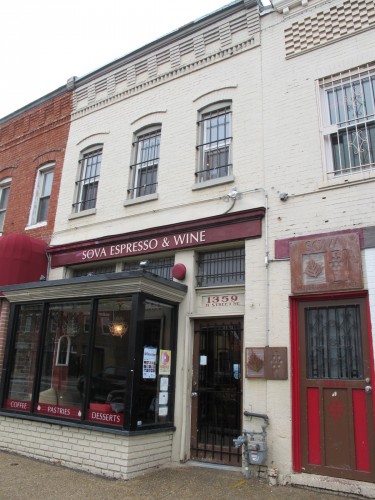 This is a bummer. SOVA is a nice place – totally chill with nice staff and good food and drinks. My band, Hollertown, played there every third Thursday and it was always fun. You never knew what you were going to get: wild drunken dancers, sedate and attentive quiet listeners or rowdy, loud conversationalists. Almost four years ago, I met the woman who became my wife there.

The owner writes us:

To all, It comes with deep regret that I must inform you that SOVA will be closing at the end of business, this Sunday, the 17th. This was not an easy decision, but it was a decision that had to be made, unfortunately. It was also a decision that had other people to consider, and who’s decisions mattered. I’m very very sorry. We were severely scared financially during the early years when business on the whole street was difficult to come by, and especially during the 3 plus years of street construction. We had some good nights, great nights even, but we also had nights where it didn’t make sense to even open the bar. To many of them. We grew with the street, and things got better. Just not better quick enough.

There will be a new ownership group taking over the space. They plan on keeping the coffee side as close to what it is right now, but I otherwise don’t know what they’ll end up doing with the bar. The new group is already in the restaurant business, so I wouldn’t be surprised if that was more of a staple for them, when it comes to food. I just don’t know. To be honest, it’s such a fluid situation, it all just materialized in the last several days. Most of the current staff will be retained, so it’s not as bad for them.

I wish there was more that I could say except to thank you all for all you did to contribute to SOVA in one way or another. All of you helped weave the fabric that made SOVA what it was. I very much thought we had some great shows and great entertainment, and clearly there were nights where the public thought so as well.

This week will be the last of everything, at SOVA that is. I’ll do my best to convince the new ownership to keep a portion of the business for live entertainment, but I can’t make any promises, of course.

Thank you all so much. This is very difficult to do, but I wish all of you the best.