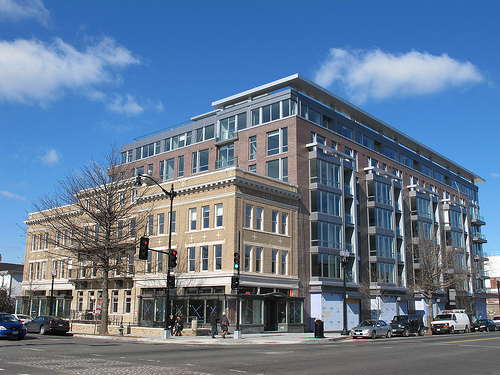 Chef Haidar Karoum and restaurateur Mark Kuller, the team behind Proof and Estadio, announce today that construction has begun on their forthcoming restaurant, Doi Moi, at 1800 14th Street NW. Doi Moi will offer regional cuisine of Vietnam and Thailand, inspired by the dishes found at street stands, stalls, and storefronts in the great cities of these food-obsessed nations.

The remainder of the restaurant is housed on the ground and lower levels of the historic four-story building on the Northwest corner of 14th and S streets that will also be the entry point for the new 125-unit District apartment complex. This building, constructed in 1909, most recently served as the headquarters of the Whitman-Walker clinic, and has been beautifully restored to its original Classic Revival style.

The ground level space will feature a dining room with a full glass facade, a large rectangular bar, wide plank oak floors, oversized leather booths, and a large, bordered, adjoining patio. The lower-level space will include a curated cocktail bar — dubbed “2 Birds 1 Stone” — as well as additional booth and lounge seating where patrons will be able to enjoy a scaled down version of the menu offered in the main dining rooms.

Doi Moi, which literally means “new change,” is typically used to denote renovation, renewal or reconstruction. It also is the term used to describe a series of “open door” economic and social policies introduced in Vietnam in 1986. According to Mr. Kuller, “The name was chosen because it embodies many elements of this project — the progressing renewal and reconstruction of 14th Street, the renovation of this beautiful historic building, the open door nature of great hospitality, and the new change that captures my personal and continuing transition from corporate tax attorney to restaurateur.”

Justin Guthrie, currently the General Manager at Estadio, will assume that position at Doi Moi while Adam Bernbach, Bar Manager for Proof and Estadio, will expand his role to include this new project, and will be based at 2 Birds 1 Stone.

Griz Dwight of Grizform Design, the DC-based architect responsible for Proof and Estadio, is designing the space. Potomac Construction Services of Bethesda, Maryland is serving as general contractor, as they did on Proof and Estadio. A summer 2013 opening is anticipated.