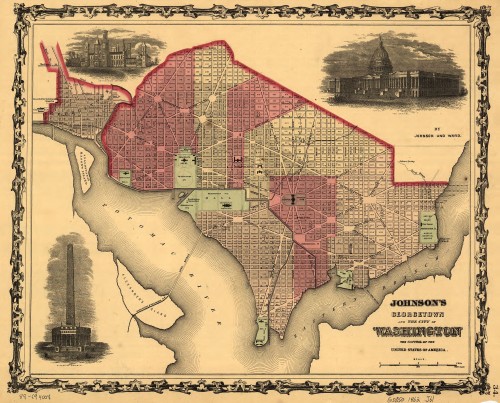 Map of the Week is a new feature by David A., a systems librarian and map geek living in Mt. Pleasant.

Title: Johnson’s Georgetown and the city of Washington : the capital of the United States of America

This 1862 map of Washington, DC and Georgetown was published in the midst of the Civil War. At this point in DC’s history, the Washington Canal ran down present-day Constitution Avenue, Washington Avenue and 2nd Street SE. Interesting features include various creeks running through the city and Georgetown’s original street names. Georgetown was bounded on its north edge by Road Street (present-day R Street). It remained a city independent from Washington until 1871, when the streets were renamed to conform with Washington’s lettered streets.