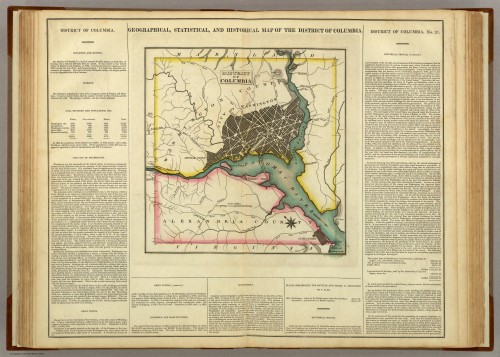 This week’s map comes from the David Rumsey Map Collection, a private collection with over 37,000 digitized maps online. I urge you to check it out, as it is one of the best sources available to the public for high-resolution maps on the web.

This skewed image of DC comes from an 1822 atlas. The map shows the original 100 square mile territory of the District of Columbia. At the time, the District of Columbia included the city of Washington, George Town and Alexandria. Their populations in 1820 were 13,332, 7,360 and 8,218, respectively. Washington County occupied the northern side of the Potomac while Alexandria County occupied the southern side.

Some notable features are the numerous creeks running through DC and modern-day Alexandria and Arlington: Tiber Creek, Piney Branch, Four Mile Run, Spout Run and others. The map also includes a few roads to outlying areas named for their destinations: Bladensburg, Leesburg, Great Falls, Frederickstown, Upper Marlboro and Baltimore. Curiously, the map features only one tavern: Muds Tavern, located northwest of the city on the Turnpike Road to Frederickstown.