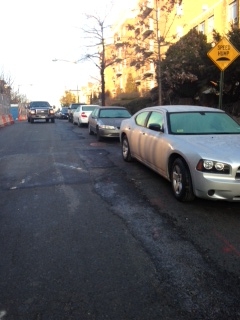 I’m writing in for 2 reasons.
1) A public service announcement to help spread the word that Clifton Street is now one-way traffic only going from 13th toward 11. A move that makes eminent good sense given the semi-permanent construction at Cardozo HS. And
2) To encourage other residents who may have also only found out about the change when they were issued a parking ticket for being parked the wrong way on a one-way street to write in to Councilman Graham and complain about the lack of communication from the city on this change to residents in the area.

According to my conversation with the construction crews at Cardozo this morning, the one-way signage was posted Tuesday afternoon (2/12). I received a ticket for being parked the wrong way on a one-way street at 7:52am Wednesday morning (2/13). And there were many many other cars in the same boat. This morning when I discovered my ticket (and only narrowly avoided a second citation) there were still several cars parked the way we have parked on Clifton for years–now the wrong way.

As far as I can tell, there was no attempt to inform residents in the area of the change. I even checked with my building management this morning to ask if they had been told. They assured me no attempt had been made to inform them, and by proxy the hundreds of people who live in their buildings immediately on the corner of the affected street, of the change. No email, no posted notice, no warning. Just a ticket.

I appealed my ticket on the DMV website (I’m unhopeful), and also wrote in to Councilman Graham asking that ALL the citations that happened with this unnotified change be overturned. In the end, it’s not a huge fine, but I was pretty indignant about it, so I’m exercising a little catharsis here and inviting others to join me. If several people write in, it might actually make a point.