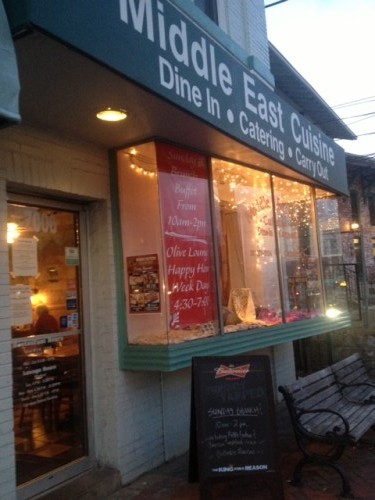 This edition of Eating Around Town was written by Abbey Becker. Abbey lives near Eastern Market.

Downtown Takoma Park is nothing if not eclectic, and Middle Eastern Cuisine and Market fits in just fine. Local hangout Olive Lounge & Grill is in the back of the restaurant, but up front, you can sit down for a full meal with table service.

This is definitely a “come as you are” kind of place—on a Sunday night, there was a young family enjoying an early dinner, while at the table next to them was a man wearing headphones and a parka throughout his entire meal.

Drinks are cheap for DC. Wine by the glass for around $6 to $7 per glass, lots of beers by the bottle ranging between $4 and $5. Water in big plastic cups. No frills, but gets the job done.

You’re not impressed, I know. But order lunch or dinner and you’ll understand.

My group of four ordered the Mezza platter, a hulking tray with homemade hummus, baba ghanoush, falafels, stuffed grape leaves, what I think was a Mediterranean salad or maybe tabbouleh, and an olive-flavored dip with the texture of hummus, all served with a basket of warm, pillowy pita. The olive dip was exceptional—creamy, salty, and rich. One of the people I was with said she generally doesn’t like grape leaves, but that these were excellent (she ate two!). The falafels were maybe the best I’ve had in the District. They were lightly fried, not greasy at all, with a creamy interior that showcased the flavor of the chickpeas and nothing more. The tabbouleh was zingy, lemony, and refreshing. Don’t be afraid of the $18 price tag. It’s definitely worth it.

Everyone ended up ordering wraps for dinner—falafel, chicken kabob, and lamb shwarma. While the wraps aren’t that big, they’re inexpensive at about $6 or $7. Having ordered the lamb, I can say that it wasn’t greasy or fatty like other shwarmas I’ve had, and I could definitely taste the grassiness of the lamb. I think I would have liked more yogurt sauce, and I’ll ask for some on the side next time. My favorite part might have been the pickle slice that came with every dish. I liked the way the sour, briny cuke cut through the richness of the lamb when I finished the wrap.

If you live in the neighborhood, takeout seems to be a popular option here.

Have a hidden gem in your neighborhood that online reviews seem to forget about? Leave a note in the comments and I’ll try to get there!