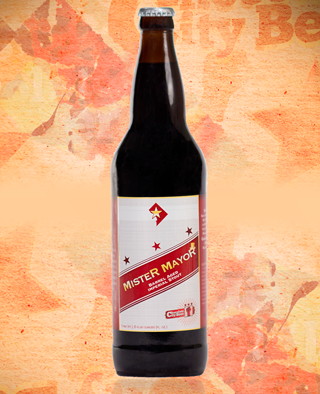 Brewed with Marion berries from Marion County, Oregon, Mister Mayor was aged for seven months in whiskey barrels from Copper Fox Distillery, located in Sperryville, VA. At 11.5% alcohol by volume (ABV), this medium bodied and roasted stout packs a tart, fruity taste. The barrel aging has also infused the beer with coconut and vanilla flavors for a round, mellow taste.

“We are excited about the release of this beer,” says co-Managing Member and Head Brewer Ben Matz of Chocolate City Beer. “This beer was the product of an idea that I have been developing for several years and seeing it come to fruition has been nothing short of amazing. The taste, flavors and smoothness of this offering should resonate with a lot of different types of beer drinkers. We look forward to its public release.”

A bottling session was held on Monday, January 28, 2013 at the brewery, staffed by employees and volunteers who assisted with the labeling, cleaning and packaging of over 1,000 bottles of this limited release brew. Rick Wasmund, CEO and Master Distiller at the Copper Fox Distillery, paid a visit to the brewery and spoke with staff and Head Brewer Matz, lauding the release of Mister Mayor and the small part his distillery played in its development. “Although Chocolate City Beer is not the first brewery to use our whiskey barrels in their operations, we are nonetheless pleased with their effort and the end result will be a success with beer drinkers all over,” said Wasmund. The beer will be sold in 22 ounce bottles (650 ml) at a price of $12 each.

Founded in 2009, Chocolate City Beer is located in the Brookland neighborhood in Northeast, Washington, DC. Along with its flagship Cornerstone Copper Ale, Chocolate City Beer also produces Cerveza Nacional de la Capital Dark Vienna Lager, 1814 ESB, First Coast Bohemian Pilsner, and a number of other seasonal and limited releases. Every Saturday the brewery is open to the public for free tours and tastings, as well as 64 ounce growler and other merchandise sales.