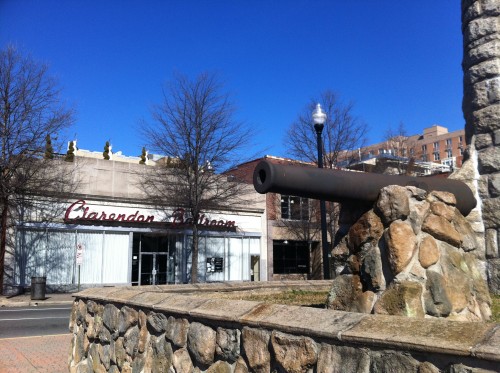 Blurbs from the ‘Burbs is written by new Arlington resident Jeff Zeeman.

Following seven years in Columbia Heights, and 15 years in total of urban living, a variety of altogether unexceptional factors (desire for more space, stellar public schools and amenities, immediate proximity to nature, better commute for my wife, an interest in no longer being awaken by drunk revelers at 2:00 A.M.) triumphed over my initial reluctance to move to the western half of Arlington. The urban snob in me at first rebelled: after years of carless living in edgy, gentrifying neighborhoods in three different cities, would I be able to survive without the constant reinvention of the urban fabric, the diverse and quirky neighborhood fixtures, and the street-level energy to sustain me? Admittedly, some part of me feared transforming from the “cool, in-the-know city guy” so central to my self-concept into “minivan-driving Dockers-wearing suburban golfer guy.” Happily, I’ve learned that, if you look carefully, Arlington is not without its own idiosyncratic quirks, and I plan to periodically chronicle them here. In this introductory post, I’ll summarize what has surprised me about Arlington so far, and what I miss most about D.C. Future posts will more narrowly focus on smaller discoveries from my adventures in Arlington and Falls Church.

(1) Between the options available to me in Arlington and adjacent Falls Church (I live near the border), I can eat just as well as in D.C., only a lot cheaper. True, Arlington has few if any offerings that can match the higher end of the D.C food scene. But the area makes up for what it lacks in expensive and stylish restaurants with its abundance of really stellar cheap eats, in particular, ethnic food. I’ve already found a regular Chinese spot (Hong Kong Palace), Vietnamese spot (Four Sisters), pizza place (Pupatella — basically, a way more awesome Redrocks) and Mexican / El Salvadoran (La Union) that in my mind trump any in their category in D.C. Arlington and Falls Church are also reputed to be chock full of burger, kebob, Peruvian chicken, Chinese, Thai/Laotian and Vietnamese places that I am eager to try. I am, however, still on the hunt for solid Indian, Sushi, and Italian options. I’ll chronicle some of my favorites in more detail in future posts.

(2) The film buff in me is rejoicing. Going to the movies in D.C. was always a bit of a nightmare. For such a cultured city, D.C. is strangely lacking in convenient movie theaters. You can brave an hour-long line at the Uptown, circle for hours before finding parking in Georgetown, or arrive 30 minutes early after fighting downtown crowds to secure a decent seat for a new release at E Street or Chinatown. Compare that to Arlington, where I can watch a classic film while drinking a few beers at the Cinema Draft House, reserve a sweet leather recliner and skip the previews at Courthouse Plaza, or catch a great independent film in Shirlington. Plus, Ballston provides yet another option for new releases.

(3) Trails, trails, trails. Because my prior familiarity with Arlington centered on Crystal City and Clarendon, I never really associated this area with natural splendor, or anything remotely resembling that. But it seems like I can’t go anywhere in Arlington without falling ass-backwards into an awesome trail or park. You can use those trails to bike virtually anywhere, and all without a hungover hipster nearly mowing you down in his car, or a delinquent kid throwing stones at you. Or you can walk endlessly, and find all manner of interesting wildlife and natural treasures. I look forward to more exploration of the Arlington trail network in better weather.

(1) Interesting neighborhood bars. So far, I’ve been underwhelmed by the bar scene in Arlington. All I want in a bar is a place with a comfortable and creative environment, a few reliable food options, a beer list with some novel choices, and a vibe that is not manufactured from a corporate playbook … in other words, some real character. Granted, until recently, this hasn’t been a D.C. forte either, but great strides have been made in recent years with the opening of Granville Moore’s, Boundary Stone, Room 11, The Passenger, The Pug, Red Derby, and so on. Arlington bars, at least the ones I’ve discovered to date, are generally either chains, or might as well be. The one exception I’ll note is the Westover Beer Garden. Great beer list, good food, and a pretty chill vibe. Doesn’t try too hard, and doesn’t need to. I’d love to see a few more neighborhood bars like this place. Suggestions welcome, by the way, as I’m still exploring.

(2) It seems harder to get to know the neighbors. Maybe it’s just the (somewhat isolated) block I’m living on, or maybe it’s a product of arriving in the middle of the winter when everyone is huddled inside, but people have taken a lot less interest in getting to know me than when I first moved to D.C.. Of course, part of that is moving from an area full of young, single folks to an area where most people are more focused on their family life.

(3) I guess it’s a sign that I’ve acclimated quickly (and may already be turning into the dreaded suburban-Dockers-guy) that I really struggled to come up with number three. I’ll go with the lack of interesting public art and architecture. Arlington could use more public art. (So could D.C., for that matter, but Arlington is even more deficient in this regard). I’ve been particularly underwhelmed, so far, by the overall creativity of the architecture (whether larger office buildings, schools and libraries, or private homes) in Arlington. While many neighborhoods are loaded with gorgeous historic homes, others feature too many ridiculously oversized McMansion-style properties squeezed onto tiny lots (the Arlington equivalent of the hideous rowhouse pop-up), and there appears to be a pathological aversion to contemporary architecture with any flare at all in the parts of Arlington I’ve explored to date. Falls Church, on the other hand, does feature many amazing mid-century gems on Lake Barcroft … a topic to explore in a future post.

I’ll be back next month with my first post chronicling discoveries from my Arlington and Falls Church adventures, in hopes of proving that the beautiful life, is, indeed, portable.