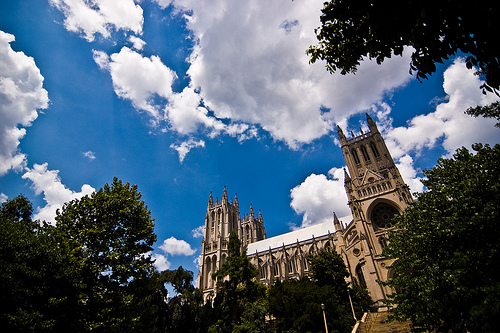 The Very Rev. Gary Hall, dean of Washington National Cathedral, has announced that, effective immediately, same-sex weddings may be celebrated at the Cathedral.

“Washington National Cathedral has a long history of advancing equality for people of all faiths and perspectives,” said Hall. “The Cathedral is called to serve as a gathering place for the nation in times of significance, but it is also rooted in its role as the most visible faith community within the Episcopal Church. For more than 30 years, the Episcopal Church has prayed and studied to discern the evidence of God’s blessing in the lives of same-sex couples. It is now only fitting that the National Cathedral follow suit. We enthusiastically affirm each person as a beloved child of God—and doing so means including the full participation of gays and lesbians in the life of this spiritual home for the nation.”

Consistent with the canons of the Episcopal Church, the Cathedral will begin celebrating same-sex marriage ceremonies using a rite adapted from an existing blessing ceremony approved in August 2012 by the Church at its General Convention. That approval allowed for the bishops who oversee each diocese within the Church to decide whether or not to allow the rite’s use or to allow celebration of same-sex marriage. In light of the legality of civil marriage for same-sex couples in the District of Columbia and Maryland, the Rt. Rev. Mariann Edgar Budde (whose Episcopal Diocese of Washington includes D.C. and four counties in Maryland), decided in December 2012 to allow this expansion of the sacrament of marriage. Hall, as dean of the National Cathedral, ultimately led the Cathedral’s decision and adaptation of the same-sex rite.

“In my 35 years of ordained ministry, some of the most personally inspiring work I have witnessed has been among gay and lesbian communities where I have served,” Hall noted.

“I consider it a great honor to lead this Cathedral as it takes another historic step toward greater equality—and I am pleased that this step follows the results made clear in this past November’s election, when three states voted to allow same-sex marriage,” he added.

“Matters of human sexual identity and questions about the Church’s role in blessing lifelong, committed relationships between its members are serious issues around which feelings run high and people of good will can often disagree. It is my hope and prayer that, if all of us open ourselves to the fullness and diversity of our nation’s many voices, we will learn to walk together in a new way as we listen for God’s call to us to be faithful to each other and to God,” Hall said.

“The Episcopal Church has shown faithfulness and courage in the long discernment process that led to the development and approval of this rite. The Diocese of Washington has similarly been a leader in the implementation of marriage equality. I have shared this decision with the Chapter and staff prior to this announcement, and I am proud that Washington National Cathedral will be among the first Episcopal institutions to adopt and implement a rite that will enable our faithful LGBT members to share in the sacramental blessings of Christian marriage,” Hall concluded.

All weddings at the Cathedral are conducted as Christian marriages in which the couple commits to lifelong faithfulness, love, forbearance, and mutual comfort. At least one person in the couple, therefore, must have been baptized. As a general rule, only couples directly affiliated with the life of the Cathedral—as active, contributing members of the congregation; as alumni or alumnae of the Cathedral schools; as individuals who have made significant volunteer or donor contributions over a period of time; or those judged by the dean to have played an exceptional role in the life of the nation—are eligible to be married at the Cathedral.