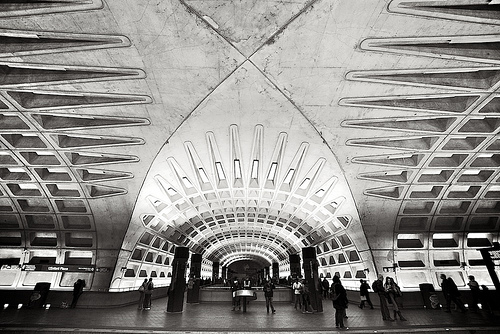 The ongoing effort to rebuild and upgrade the Metrorail system to provide safer and more reliable service will continue over the weekend of January 25-27 on the Red, Orange and Green lines.

There is no scheduled work this weekend on the Blue or Yellow lines.

Red Line
• From 10 p.m. Friday through noon on Sunday, Red Line trains will single track between Farragut North and Judiciary Square to allow for track maintenance, tie renewal, structural and ceiling repairs.
• During this time, trains between Shady Grove and Glenmont will operate every 20 minutes.
• Between 9 a.m. and 9 p.m. on Saturday, and between 9 a.m. and noon on Sunday, additional Red Line trains will operate between Shady Grove and Farragut North, providing service about every 10 minutes between those stations.
• Customers should add about 10 minutes to their travel time while track work is in effect.
• Note: Normal Red Line service will be restored at noon on Sunday.

Green Line
• From 10 p.m. Friday through closing on Sunday, Green Line trains will single track between College Park and Greenbelt to allow for construction of a test track for new 7000-series railcars.
• Green Line trains will operate at regular weekend intervals. However, during daytime hours, every other train will begin and end at College Park, rather than Greenbelt.
• Customers should add about 10 minutes to their travel time.

Check out the “Plan for the next generation of Metro” after the jump.

Metro’s management today presented the Board of Director’s Governance Committee with a staff draft of the Authority’s strategic plan, called Momentum, which defines the next generation of Metro.

While Metro is currently going through a multi-year capital rebuilding effort to bring the system into a state of good repair, the agency must simultaneously begin planning for expansion to help ensure the long-term competitiveness of the National Capital Region and keep pace with demand from expected population growth.

“Our customers know that many trains, stations and buses are already crowded and we need to begin planning now to prevent that from worsening and prepare for more riders,” said General Manager and CEO Richard Sarles. “As the jurisdictions plan various expansion projects, we also need to make sure that we have a seamless, multimodal, transit network and Metro is in a unique position to serve as the transit planner for the national capital region.”

To help identify the top priorities for action to its customers and stakeholders, Metro conducted unprecedented public outreach, that gathering direct feedback from more than 10,000 people and raised awareness among millions. Specific outreach tactics included crowd sourcing tools, online surveys, print advertising, email to Metro customers, deliberative forums, and meetings with community and business organizations. More than 3,000 riders voiced their opinions through an online survey over a 30-day period. The majority noted the importance of Metro in their decision-making to move to the Washington Metro area, and an additional nine out of ten respondents agreed that their commutes played an important role in job selection decisions.

In presenting the staff draft to the Committee, Metro planning director Shyam Kannan said that the agency’s first priority will be maximizing the current transit network, and utilizing every bit of capacity available as a foundation for future growth and expansion to meet the needs of the region of the future. Other priorities identified in the strategic plan include:

The plan includes funding estimates that will be required to meet the near-term and longer-term strategic goals. The investment is outlined as a three-step approach:

$1 billion per year is necessary to continue to maintain safety and reliability of the system after the Metro Forward rebuilding effort returns it to a steady state of good repair;
An additional $500 million a year would allow Metro to maximize the capacity of the system’s core and prepare it for the transit projects that are coming on line in the region. The maximization of the existing system would include adding railcars, yard storage and power capacity to run all eight-car trains during peak periods, as well as physical connections between existing rail lines and stations to provide more capacity and flexibility. In addition, Metro would take a leadership role in coordinating regional transit through unified trip planning tools and seamless payment technologies that would allow travelers to take full advantage of all transit providers in the region; and
$740 million additional per year would allow Metro to prepare for growth. Features of Metro’s long-range plan, identified for 2040 and beyond, are conceptual and still under development, but include the possibility of building new tunnels in the core of the system to separate lines that currently share tunnels, building express tracks along the Silver/Orange lines in Virginia, as well as expansion of lines beyond their current termini.

Metro today challenged the region’s leaders to construct a funding strategy that residents and businesses deserve.

The plan will be reviewed and edited by the Board of Directors, and further public outreach is planned before the document is finalized.