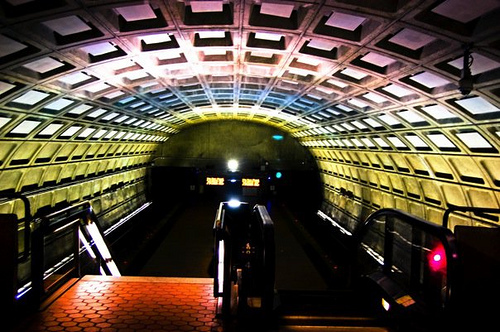 The ongoing effort to rebuild and upgrade the Metrorail system will continue over the weekend of January 11-13, 2013, on the Red, Blue and Green lines. The work will begin at 10 p.m. Friday and continue through system closing on Sunday.

There is no work scheduled this weekend on the Orange or Yellow lines.

Between Friendship Heights and Van Ness to allow for track improvements, and fastener and insulator renewal.
Between Rhode Island Avenue and Fort Totten to allow for installation of cable and signal components, as well as track maintenance.

Throughout the weekend, trains between Shady Grove and Glenmont will operate every 24 minutes. Between 9 a.m. and 9 p.m. on Saturday and Sunday, additional trains will operate between Van Ness and NoMa-Gallaudet, resulting in service an average of every 12 minutes between those stations. Customers traveling through either work zone should allow 15 minutes of additional travel time.

Customers traveling between Blue Line stations south of Pentagon and stations east of L’Enfant Plaza should transfer at L’Enfant Plaza for a faster trip without the need to use shuttle buses.

Green Line trains will single track between Greenbelt and College Park to allow for construction associated with a new track to test 7000-series railcars. As a result:

From 7 a.m. until 6 p.m. on Saturday and Sunday, every other train will originate/terminate at College Park, rather than Greenbelt.
Green Line trains will operate normally, at regular weekend intervals, between College Park and Branch Avenue.
Customers traveling to or from Greenbelt Station should allow about 10 minutes of additional travel time.