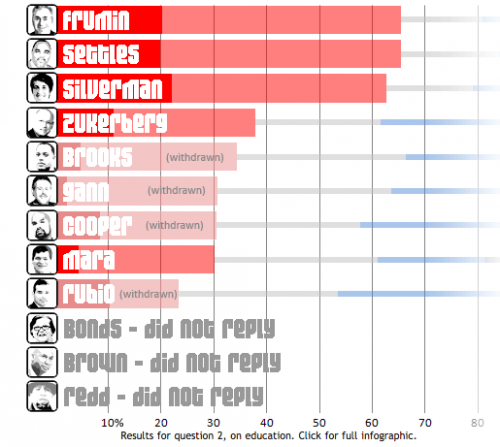 It’s a photo finish for the at-large DC Council candidates’ visions for how to address crime. The voting at Let’s Choose DC ended in a near-tie between Matt Frumin and John Settles, with Elissa Silverman a very close third.

DC voters rated the responses of nine candidates to this question:

Chief Lanier and Mayor Gray have made a lot of the drop in homicides, but other crimes—assaults, robberies—remain stubbornly high. How should DC police deal with those challenges, and do you have an opinion on how many officers MPD needs?

Let’s Choose DC is presented by PoPville, Greater Greater Washington, and DCist and is open to all DC residents. Nine candidates provided responses. Five are still eligible for the April 23 ballot, while four have either dropped out of the race or did not file petitions by the deadline yesterday.

Mr. Frumin, Mr. Settles, and Ms. Silverman all had over 60% of participating voters rate their responses as persuasive or very persuasive. Mr. Frumin and Mr. Settles were almost perfectly tied; 65.43% of voters gave Mr. Frumin’s response a positive rating, while 65.38% did so for Mr. Settles (62.63% did for Ms. Silverman).

Three other candidates—Anita Bonds, Michael Brown, and Perry Redd—did file petitions to appear on the ballot, but did not give us answers to the crime question.

Mr. Redd has, however, joined in starting with question 3, on education, his response and those of the other 5 participating candidates still in the race. That includes the answer from Paul Zukerberg, which we did not have when the answers went live on Tuesday because, frankly, I messed up; I accidentally mis-copied and pasted the candidates’ email addresses, and never sent Mr. Zukerberg the question.

He kindly rushed an answer to us, so even if you have already voted, please consider reading and rating his answer so we can fairly weigh his answer in the results for that question, which will come out next week.

If you haven’t yet voted on the education question, please start voting today! You can vote until midnight Monday, at which point we’ll have responses to question 4, on the District’s growth.