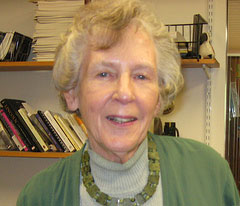 Photo courtesy of Politics and Prose

Politics and Prose is located at 5015 Connecticut Ave, NW.

After one of the most outstanding careers in the history of bookselling, Barbara Meade has decided to retire from Politics & Prose, the store she helped create with Carla Cohen and has done so much to nurture over the past three decades. Since handing over the reins of ownership a year-and-a-half ago, Barbara has served as an advisor to the new owners—Bradley Graham and Lissa Muscatine—and has remained a frequent presence in the store. Her continued involvement in P&P has been invaluable in assuring a smooth transition. Brad and Lissa have credited Barbara’s expert counsel and wise insights with helping them enormously to gain their own new footings in the book business.

Recently, Barbara informed the staff that she wants to create space in her life to allow more time for reading. She will remain a vital part of the heart and soul of Politics & Prose and will continue to be admired and appreciated for the many ways in which she has influenced our community.

Below is a message from Barbara to all of the customers, authors, publishers, sales reps, and friends she so actively engaged during her bookselling career:

A Message from Barbara after the jump.

On December 31, after a bookselling career that began 35 years ago and encompassed four stores, I hung up my book bag and retired. But I was careful to place my bag where it is easily retrievable because I’ve been so tightly wrapped up in Politics & Prose for the last 29 years that I’ll never be able to totally leave.

Most important of all, there was my long partnership with Carla, a relationship I regarded as a gift to and from both of us in the third quarter of our lives. There are also many, many other people whom I’ve met in the world of books—customers, authors, bookselling colleagues, and publishers’ reps—all readers whose friendships have immeasurably enriched my life. So I’ll continue my involvement in the store by hosting events, hanging out in the coffeehouse, and leisurely browsing what’s new on the bookshelves. You may even find me sitting in a chair somewhere in one of P&P’s inviting alcoves, trying out a chapter before I commit to a book purchase.

When Carla became ill in 2010, Carla’s husband David and I were determined to find exactly the right buyer for Politics & Prose, a buyer totally committed to the mission of the store—to support intelligent fiction and nonfiction written by articulate authors that would impact our lives in a thoughtful way. I regard it as almost a miracle that we found exactly the right people, Brad and Lissa. In the 18 months I’ve continued to work in the store since they became the new owners, I’ve taught them everything I know. They’re fast learners—in just a year-and-a-half they’ve mastered my 35 years of accumulated knowledge! I’m tempering my sadness in leaving with my complete confidence that Brad and Lissa will sustain and grow P&P’s stature as an important literary and cultural center in today’s world. –Barbara Meade