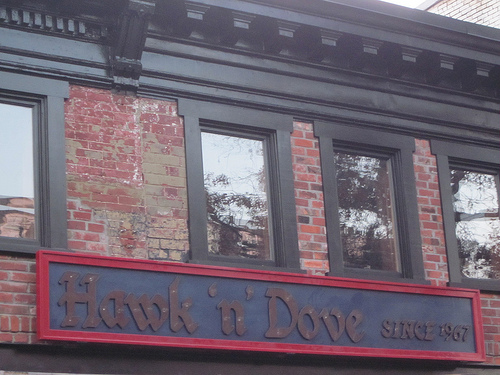 New Hawk and Dove signage sprouted back in November. Finally comes word (and photos) of their opening from the folks at Capitol Hill Corner:

The Hawk & Dove expects to open on Thursday, January 17, according to manager Jack McAuliffe. The restaurant was originally scheduled to open in February, but moved its debut up, in part, to take advantage of Inauguration traffic. McAuliffe, until recently the general manager at Boxcar, another Xavier Cerveras enterprise, said, “we want to bring a totally different experience to the block – try to do something new with a fun feel.”

The Hawk & Dove will be open at 4:30pm initially (including Inaugural Day) but will start serving lunch on Friday, January 25th.

Read more →
More Stories
Building Getting Renovated at 8th and Florida Ave NW to Become a Restaurant?Car in the Canal