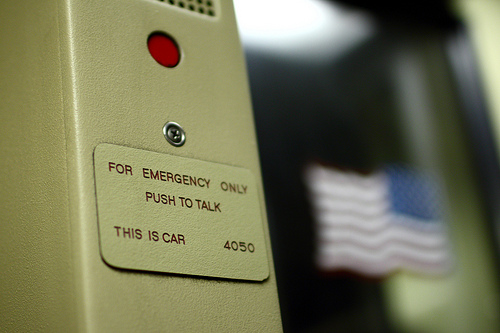 Remember how great you felt when you got that new high-tech device over the holidays? Now imagine how you’d feel if it were snatched out of your hands in an instant. That’s the message Metro Transit Police want customers to consider while riding on the system, following an uptick in snatch thefts in the post-holiday period.

In the two weeks from Jan. 13 through 26, a total of 31 electronic devices were “snatched” on the Metro system — an average of just over two per day. The figure is down from the same period last year, when 44 snatch thefts were reported, but is still an increase from the first two weeks of the year, which had 19 snatch thefts.

“You wouldn’t walk around in public with $300 cash in your hand,” said Metro Transit Police Deputy Chief Ron Pavlik. “That’s essentially what you’re doing when you’re holding an expensive phone or tablet device.”

Metro has supported recent initiatives to dry up thieves’ ability to resell stolen devices, including the new ability to render a device useless once stolen, known as “bricking.”

“Thanks to the leadership of Senator Schumer, Mayor Gray and (MPD) Chief Lanier, victims of cell phone robberies now have the ability to render their phone inoperable,” said Metro Transit Police Chief Michael Taborn. “This is a big step forward in the fight against cell phone theft.”

Metro also has used innovative tactics, such as undercover decoy operations, to take thieves off the street.

• Keep your high-tech devices out of sight.
• White or red headphone cords are often a telltale sign that you have an expensive device on you. Consider changing the cord to a less conspicuous color.
• If you choose to use an electronic device, avoid becoming distracted by what is on the screen. Always maintain an awareness of what is happening around you.
• When holding an electronic device, use both hands to make it more difficult to snatch.
• Always avoid using electronic devices near train doors. Many robberies take place as the doors are closing, allowing the thief to get away.
• If your device is stolen, immediately report it to police and contact your wireless provider. Under a new law, wireless carriers can render your device useless, thereby eliminating the resale value to the thief.
• Use the password feature on your device to protect any sensitive information.
• Take advantage of GPS tracking features on many devices that can remotely lock, wipe and locate your phone or tablet.
• Never resist or chase a thief. No device is worth the risk of personal injury.