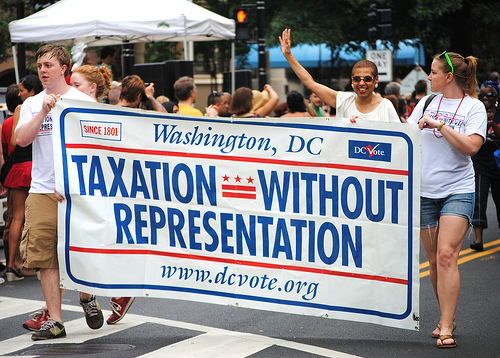 DC Vote has filed a petition on the White House website asking that the Taxation Without Representation license plate be placed on the presidential limousine prior to Inauguration Day.

The presidential limousine currently displays DC plates that do not carry the Taxation Without Representation message. District residents pay federal taxes and serve and die in wars, but have no vote in Congress. The District adopted Taxation Without Representation as its official license plate motto in 2000 to give the country a visible demonstration of the political reality in the nation’s capital.

“With the help of thousands of Americans who believe in equal rights, we expect to see the Taxation Without Representation plates rolling down Pennsylvania Avenue during the inaugural parade,” said DC Vote Communications Director James Jones.

The early response to the petition has been strong. So far, nearly 3,000 people have signed it on the White House on-line petition site. If 25,000 people sign by January 18th, the administration will provide a response.

“We are beginning a major new, nationwide social media push to reach our goal prior to the inauguration,” Jones said. “The support we have received from people across the nation sends a strong message to the White House, but we need to maintain the momentum.”

The petition provides an opportunity for the people of DC and for supporters of our fight for full democracy everywhere to elevate the struggle for full democracy to a new level. DC Vote is very grateful for President Obama’s support for our struggle for equal rights. He has stated publicly that we should have the same voting rights as all other Americans. Displaying the Taxation Without Representation plate is simply an expression of the truth about DC’s political status.