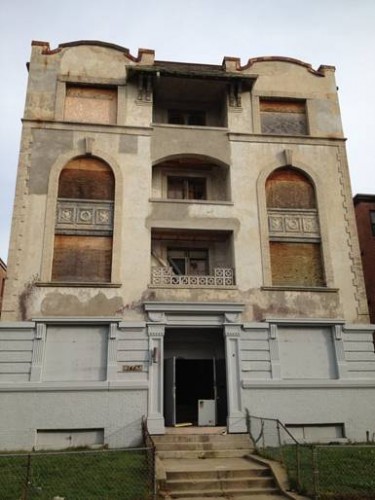 Urban Investment Partners (UIP) closed its third and final acquisition of 2012 with the $2.4 million purchase of the 32-unit apartment building at 1483 Newton St., NW in the Columbia Heights neighborhood of Washington, DC. Approximately 80 years old, the building has been vacant for decades and has been condemned by the DC Condemnation Board. UIP will start a $5 million total gut rehabilitation of the building in the second quarter of 2013, once plans and permits are complete, and will create 39 modern rent-controlled apartments.

UIP acquired the building from two sisters-in-law who inherited the property from their husbands. It is one of the “Seven Sisters” – seven identical buildings between Newton Street and Meridian Place NW, all developed by prolific Washington real estate entrepreneur Harry Wardman and designed by architect Albert H. Beers in the early 20th century.

“Based on its current blighted condition, 1483 Newton Street is the ugliest building we have ever purchased,” said Steve Schwat, Principal, UIP. “I am happy to begin the process of relieving the neighborhood of this eyesore while restoring the building’s classic facade. I believe that renovating this property, as we have done with 1346 Park Road and so many other buildings in Washington, will add value to the entire neighborhood.”

Added Marty Zupancic of Marcus & Millichap, who represented the seller: “This is a significant transaction in that 1483 Newton Street NW is the last blighted, vacant multifamily property in the Columbia Heights submarket. Its rehabilitation will be symbolic of the renaissance that the neighborhood has undergone in the last decade.”

UIP owns another nearby Wardman/Beers building at 1430 W Street, one of “Six Sisters” along the 1400 block of W Street, NW. UIP General Contracting (a UIP subsidiary) is preparing a full interior and exterior renovation of that property. UIP also is renovating the exterior and common areas of the 24-unit 1489 Newton Street Cooperative located next door to the newly acquired 1483 Newton Street property. UIP’s work with the co-op supports its residents’ goal of maintaining and preserving their building as high-quality, affordable housing.