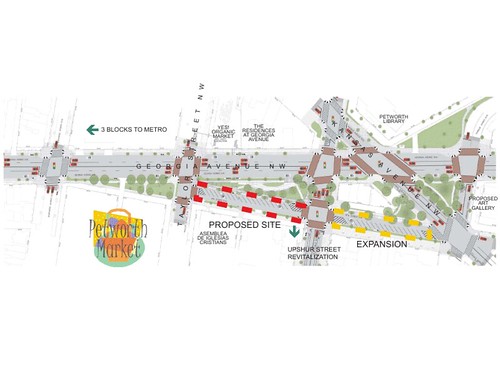 I’ve been getting lots of emails from folks asking for an update. The Interim Coordinator Larry Chang has been kind enough to do so:

“We had an initial setback when the non-profit we were expecting to sponsor the market declined so we’re looking for another sponsor or will create our own non-profit if necessary. In the meantime, we’re in the process of getting vendors interested, getting the support of local merchants so we can get Councilmember Bowser’s endorsement.

We had originally planned for a Thursday market but responses seem to favor Saturday. We’re running an online poll here:
http://poll.pollcode.com/u8dQ”

I vote Saturday! If you’d like to see a larger PDF of the map above you can click here – PetworthMarketSite

Whether it’s Thursday or Saturday, I’m digging the location.