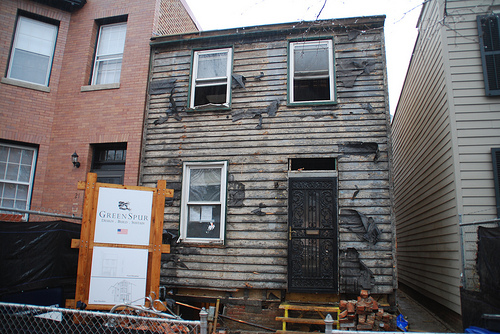 Ed. Note: Michael Kiefer from GreenDCRealty will be contributing a monthly column about various aspects of real estate in DC.

GreenSpur Inc.one of Washington’s exciting new green developers recently took on quite possibly one of the more challenging adaptive reuse projects I have seen in years in an effort to demonstrate that “carbon neutral” construction is possible at all levels, even with a dilapidated pre Civil War era home. This adaptive reuse home at 19 4Th St NE being just blocks from the Nation’s Capitol was to be emblematic of the challenges GreenSpur Inc was looking for, however rebuilding of it was the easy part, the real challenges didn’t come about until the layers of DCRA began to unfold.

As most are familiar dealing with local government agencies in large city there are the normal hurdles that one must overcome to get projects up and running and with DCRA the District’s building regulation department is no different, that is until you start proposing elements of sustainability and historical preservation. Preserving the historic makeup of Washington is something we all want to see and be a part of but we seem to be caught in the midst of some conflicts when it comes to proposing some really exciting opportunities to reducing a buildings total life-cycle impact on the environment. DCRA’s primary focus is to make sure that buildings are constructed properly however their knowledge of some fairly mainstream technologies such as geothermal HVAC systems presented this group with a few more challenges. 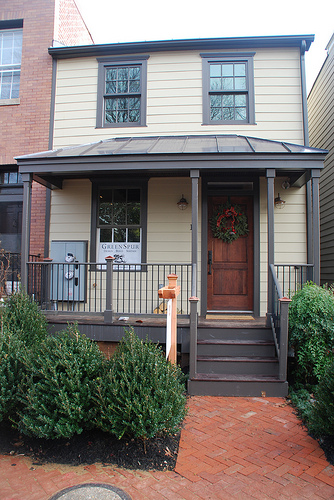 Greenspur’s president Mark Turner is no stranger to the DC permitting process, he previously worked as Vice President of Construction for Abdo Development. Personally I was surprised when I heard that it took over 6 months, just to acquire a building permit when all you hear is that the Mayor’s office is seeking to find ways of expanding green development and green collar jobs here in the Nation’s Capitol. After acquiring the building permits DCRA proceeded to shut this firms job down twice for lack of permits, which as anyone who has ever attempted to build something in DC knows being shut down does nothing but cost time and money. From my discussions with Turner he mentioned that DCRA finally acknowledged that the proper permits had already been obtained and that it was an internal issue within their department that caused the delay.

The real interesting part comes in when Turner sought the permit for the geothermal HVAC system and well drilling. Now understandably DCRA probably doesn’t see permits coming in all that often for well drilling under its purview but the explanation on why geothermal wells were not possible almost appears borderline comical but at the same time completely frustrating that the level of knowledge that exists in such a department is inappropriate. If you are not familiar with how a geothermal system works under a simplified view, there are two wells that go down a required depth in order to properly exchange heat energy with the thermal energy stored in the ground. DCRA’s initial explanation for not permitting the system was that it would make the neighborhood cold by extracting all the heat from ground forcing the neighboring properties to be colder. So this sort of makes sense when you are in the 3rd grade but as these wells go down several hundred feet that explanation pretty much loses steam to say the least. From Turner’s view, the green building review system needs some upgrading as the entire process for permitting the geothermal permit took over two months from start to finish.

When I asked Turner about his thoughts on the overall process he concluded that It’s a real shame in this economic climate that DC is not doing more to allow green projects of this nature or any projects for that matter to run more smoothly through their system. These are economic dollars and green-collar jobs that should stay in the city. GreenSpur loves the historic and architecture fabric of DC, it fits their brand and adaptive reuse story very well. Unfortunately, they have been forced to advise their clients on the difficult nature on getting anything processed in DC. “It really can kill the viability of a project, more so now than ever,” states Turner.

Despite all this GreenSpur does not regret the project, it was a huge success for us to tell and complete this story – in spite of the hardships. “We didn’t want a picnic project – we wanted to show people that carbon neutrality really is possible anywhere. Not only is it possible, but it can be in good taste and in context of an historic fabric of the neighborhood.”

As this home represents more than just an adaptive reuse it highlights how green development is ultimately possible even when confronting some interesting policy challenges. It is also worth noting that Mark Turner will be offering public open houses starting January 3rd – January 17th each day from 4-6pm in an effort to showcase how historic preservation and green building can be one in the same. He is also planning what he is calling the Big Green event on the last day of the open house with some guest speakers on the topic.