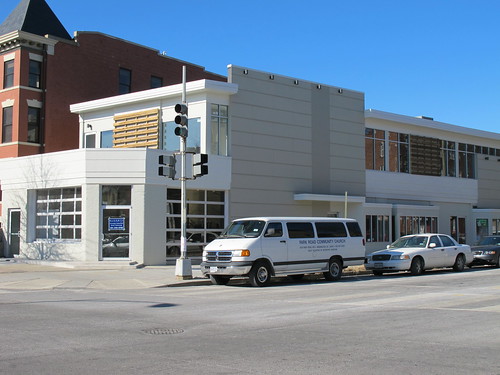 We’ve been following the progress of this building as well as its tenants for quite a while. (No more word on Vegetate taking the second floor…) But the good news is that John Andrade of Asylum has sealed the deal on his project Meridian Pint. I spoke with John on Monday afternoon and took a quick tour of the property. First of all, the property is huge! I had no idea how large it was. Here’s what the first floor looks like: 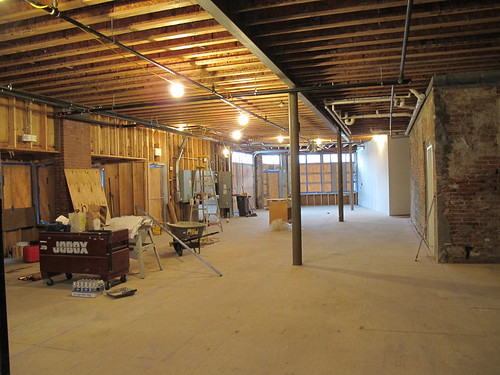 I’m not sure if the photo properly conveys the size but it is 3000 square feet. And the basement is also 3000 square feet. So this is quite a big project. I took a look at the floor plans and the set up promises to be pretty sweet. The basement section, which will be more of a bar than restaurant, will be called The Joint Chiefs. In this space you will have 3 pool tables (available by the hour), a hand shuffle board table, and 25 American Craft beers on tap including one cask.

On the first floor, the space will feature the Restaurant – Meridian Pint. Here you will have booths, tables, a bar, and of course 25 American Craft beers on tap (there will be no bottles or cans). The menu will feature “contemporary American cuisine with an international flair”. When the weather warms up there will also be an outdoor seating patio area. They will feature a brunch on Saturday and Sunday from 9am – 3pm.

At the moment, John plans to open both spaces by early June in time for the World Cup (Soccer). During the World Cup the space will be open during lunch and will show the games. There will be four televisions in the basement space. For those that have been to Churchkey and Birch & Barley on 14th St. in Logan Circle – there is a similar layout here. The layout is similar in that there will be one space that is more of a restaurant with a bar and one space that is more of a bar that will also serve food.

One last cool aspect John told me about was some planned bicycling trips for customers. He hopes to be able to take some folks on tours of breweries and vineyards in Virginia to see where many of the beers and wines you are drinking come from.

All in all the whole project sounds pretty sweet. And now I have another reason to look forward to the World Cup. Allez Les Bleus!

Read more →
More Stories
“Knit Graffiti” in Mt. PleasantJosh on the Little Pieces of the Puzzle (By Danny Harris)