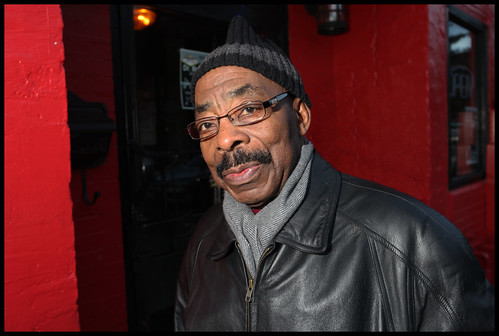 “I was a young man when I came to D.C. in 1949. I first worked as a stone setter at the Washington National Cathedral. After a number of years, I decided to go into business. In 1967, I ran a grocery store at 14th and Belmont. Then, the riots happened in 1968 and I bought this place shortly after that. I have been in this location ever since. The New Vegas Lounge has gone through some changes, it was a restaurant, then it was a strip joint and then I turned it into a rhythm and blues club, but it has always been family-owned. I used to go to Las Vegas a lot, so that’s how I got the name.

“Before the riots, there was a car parts place, drugstore, liquor store, and plumbing store on this block. After the riots, everyone moved out. I was here for about ten years with almost no other businesses on this block. I shared the block with a lot of vacant lots and street people. I went through a lot then. It was tough. But, I stayed open because the guys who let me have this place, two brothers from Detroit, told me to hold on and pay them when I could get the money. So, I stuck around and waited out the bad weather. And things started turning around with time.

“To me, the most interesting thing about this place is its position in history. This place started as a family business and became a national legacy. The New Vegas Lounge is known throughout the world for its music. It has become a point of heritage for this city. When you look at how many things transitioned around this place because of the riots and reconstruction of the neighborhood, this place remained. The New Vegas Lounge also gives you a view into musical history. I have seen everyone from James Brown, B.B. King, Wilson Pickett, Stevie Wonder, Crosby, Stills and Nash, Aretha Franklin, The Temptations, War, and Teddy Pendergrass play here. You name ’em, they’ve been here. This is the spot where people performing in other places around town would just walk in to say hello to Dr. Blues and get up on stage for a few minutes and play. Some of the most famous musicians have played to audiences of only fifteen people.

“I am an entertainer, too, and have been singing for a long time. I learned to sing coming up in the church. I sing some of my own songs and then I sing the classics. I know how to sing most anything. I picked up the name Dr. Blues along the way and that name has since been made famous. I’ve played overseas and around this country. You name the place and I’ve been there. I even had a contract in Las Vegas for this past New Year, but I couldn’t go because I had to entertain my people here in D.C. This place means so much to me. Everybody likes this place. You will never hear a bad word about the New Vegas Lounge. If someone gets out of line, people will say, ‘Hey, don’t mess with the New Vegas Lounge. This is our home.’

“Going forward, we will remain a family-owned rhythm and blues club. We have been in business for forty years. In that time the whole city changed. Big changes, you know what I mean? It’s good. Someone needed to finally come to this neighborhood with some money after the riots to make some changes. You know, I don’t get a lot of the clients that I had 20-30 years ago, but we get lots of new people and still play the music that people like to hear.”

You can hear Dr. Blues and the Out of Town Blues Band playing at the New Vegas Lounge at 1415 P Street NW.

More Stories
Dear PoP – Where to Get Art Framed?Judging Backs of Row Houses