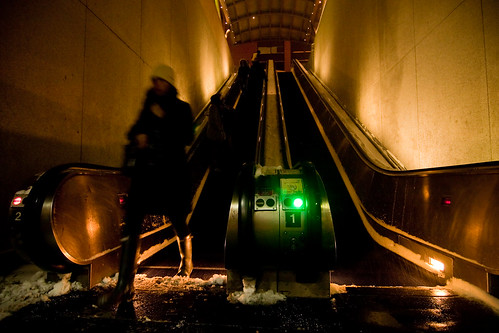 I read with horror the reader account of Saturday’s brawl on the metro. I wanted to share the below story, not to attempt to diminish the extremely troubling aspects of that incident, but rather for some balance as we consider our city and the folks who call it home.

As I was walking along the red line platform at a crowded Gallery Place station last night, I noticed a small cluster of folks standing at the base of an escalator. One of them called out to me. He was one of four or five teenagers huddled around a mid-30’s blind man. It quickly became apparent that the man was trying to get to MLK Library. But he was disoriented, and the kids themselves were confused about which of the three station exits would be best for him to take. After I consulted with them, we realized that he should proceed up the escalator directly in front of him. One of the teenagers imparted this information to him and got him pointed in the right direction.. This is where I thought the story would end. But as the disabled gentleman took his first steps forward, he stumbled and seemed no less confident than before. Without hesitation, one of the kids put a comforting hand on his back. Another said “We got you.” And then, I watched in awe, as the entire group selflessly detoured in order to escort him all the way to his destination.

The teenagers’ clothes, hairstyles and speech patterns could all be fairly described as “urban.” But their behavior showed that the stereotypes we sometimes accept don’t always capture our common, simple humanity. I want to publicly thank those kids for reminding me why I love living in the urban core of our city.”