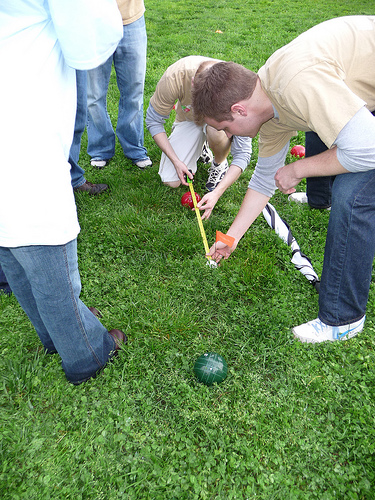 “Due to the success of our Fall League, DC Bocce is excited to announce the opening of a Winter Season!  The Winter Season will take place indoors at both the American Legion and Pour House on Capitol Hill starting in early 2010.  As with our Fall season, games will be played Wednesday nights on framed courts with artificial turf.  We’ll be using lighter weight bocce balls so no harm will come to the premises or the players next to you.  Since we’ll be playing inside, we’ll never have daylight or weather issues.  And you can play and drink at the same time without fear of the park police!

Registration will open on Monday, December 21st, at 10:00am on our website, www.dcbocce.com.  Teams must have a minimum of 4 players and a maximum of 6.  Playing start times will run from 6:30 through 8:45pm.  If you register by New Year’s Day you’ll pay $35 per person, after that the fee will go up to $40.  The captain’s meeting will be held at the Legion on Wednesday, January 13th, and the first week of play will follow on Wednesday, January 20th.  There will be five weeks or regular season play followed by three weeks of playoffs.  The season will end with a party at the Pour House on March 10th.”

“Skee-ball games will be held at H Street Country Club every Sunday and Tuesday night for eight weeks. Once a week, each team will play two games to determine final rankings. The season will culminate with a one-day playoff and championship challenge.

Registration for season two at H Street Country Club is officially open. Players can start a team or join individually and find a team at www.unitedskeeball.com/leagues/h-st-country-club. The deadline to sign up for season two is January 10, 2010.