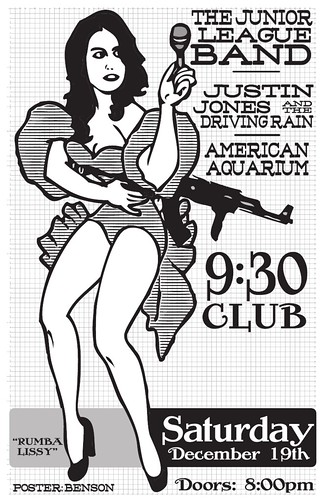 “It’s been a famous December for the Junior League band. Having just returned from the Chicago Bluegrass and Blues Festival with Bela Fleck and the Flecktones (see picture!), and a Lissy solo opening show (and solo EP release) with the Grammy nominated Rosanne Cash (see picture!), the Junior League Band returns home to the 9:30 Club this Saturday evening with pals, Justin Jones and the Driving Rain for a Dixieland swinging, gal fronted banjo/fiddle/harp rockin performance.

“This coming weekend SCL will present “In dulci jubilo: Music for the Christmas Season” on Saturday, December 19th, at the Pope John Paul II Cultural Center.

The program will consist of seasonal works spanning over 500 years from the Renaissance to modern day. There will be songs from Poland, Spain, and Germany, works by Renaissance masters such as Palestrina and Victoria, the premiere of a new setting of the nativity text O magnum mysterium (by Cheese Lord, George Cervantes), and carols for all to sing.

After the jump some more props for MPD.

(Washington, DC) – Mayor Adrian M. Fenty, the Metropolitan Police Department (MPD), and members from the Bureau of Alcohol, Tobacco, Firearms and Explosives (ATF), announced today the arrests of 44 suspects for the possession and distribution of firearms and narcotics with a street value of more than $1.5 million.

The investigation was a joint effort with MPD, ATF, and the Federal Bureau of Investigation (FBI). Both the FBI and ATF were active partners in the undercover effort and the subsequent prosecution of defendants. The United States Attorney’s Office for the District of Columbia worked quickly to indict and charge the 44 individuals involved.

“The numbers of drugs and weapons are staggering,” said Mayor Fenty. “The men and women who put their lives on the line to go undercover deserve our thanks for making the city safer.”

The undercover operation was set up inside of a Northeast, DC body shop called E.B.’s Auto Shop with five undercover officers posing as international drug traffickers. The first undercover purchase was made on June 24, 2009. Arrests continued through December 2009.

MPD’s Major Narcotics Unit and federal authorities seized nearly five kilograms of cocaine, 49 ounces of PCP, 210 grams of crack cocaine, and 2.5 kilograms of heroin. The drugs were purchased and seized by the detectives in the investigation. Additionally 123 firearms, including 25 assault weapons were purchased or seized during the undercover operation.

“This is an example of the guns, gangs and drugs that are wreaking havoc on the city,” said Police Chief Cathy L. Lanier. “This is the most successful operation that we’ve done in Washington, DC since the 1970s.”

A ring of violent criminals that were involved in carjackings, home invasion robberies, auto theft, drug dealing, and firearms trafficking were arrested as part of this undercover investigation.

“We are honored to be a part of one of the most successful violent crime initiatives in the District in the last 30 years,” said Richard Marianos, the ATF’s Assistant Special Agent In Charge.

Firearms purchased during the operation were supplied from Florida, North Carolina, West Virginia, Kentucky, Tennessee, Mississippi, Virginia, and Maryland. Heroin and cocaine originating from Mexico, Guatemala, and Canada was purchased or seized during the investigation.

Defendants were arrested from local areas such as Washington DC, Maryland, and as far away as Mexico and Canada.”