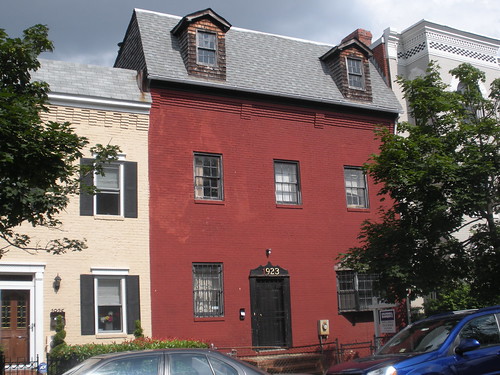 List Date: Originally listed in 08/08. The listing information from that time suggests that the original agent may have been the owner (or one of the owners). In March of 2009, it was re-listed at $775,000. with Chuck Burger of Coldwell Banker (Chuck listed 1016 T St NW, which was featured recently).

Bank Owned?: No. Tax records indicate that the property was owned by an investor (non-owner occupant).

Type Of Financing: Conventional with $267,000. down payment

In response to the original Good Deal or Not (GDoN) post, several readers gave thumbs up for the location and size of the property. It was tough to get a grasp on this one as it is both an unusual structure for downtown DC, and there were no interior photos. The most recent listing stated “Definite fixer upper but worth it”.

When the property was first put on the market back in August of 2008, the listing comment makes reference that the pricing came from the tax assessment provided by the District government. In looking into the tax assessment history, it is startling to observe that, as recently as 2007, the Office of Tax and Revenue went with a valuation of $192,970. Upon closer look, there appears to have been a miscalculation, as the value of the structure at that time was at $321,160. with the land value at $58,220. for a total of $379,380. In 2008, when the District budget started to look a little tight, the land valuation alone shot up to a whopping $505,220. for the 2736 square foot lot. The Seller wisely put the property on the market and appears to have escaped the $10. per $100. of assessed value that was then associated with vacant property. The recent tax record shows the tax rate calculated at the regular residential $.85 per $100. of assessed value. Assuming the property, which was in need of fixing up, was vacant, at the then (2008/part of 2009) vacant rate, the property taxes would have been $91,700. per year. Actively listing a property was one exemption that owners had from the vacant tax rate.

Several commenters on the GDoN post noted the unusual style of the building. I don’t know how it was originally configured, but the tax record suggests that at some point it had been divided into four separate dwelling units. The recent listing suggested that it was being marketed as a single family residence.