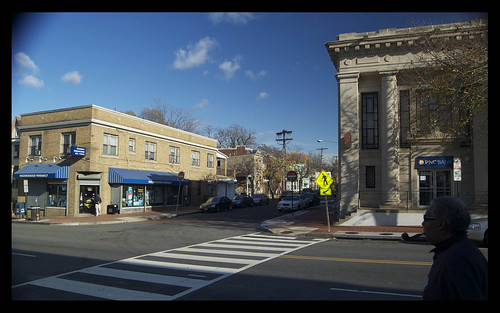 [David Garber is a DC neighborhood blogger and real estate entrepreneur. His mission: help bring back DC’s neighborhoods, one rotting house at a time. You can read David’s first post here.]

The U Street House is at the center of the photograph, just steps from MLK Ave. In a couple of years, a streetcar stop will be located just left of this intersection.

It’s month two and progress is finally being made. Because I am essentially fixing the shoddy work of a previously-attempted flip, a lot of this initial work is less Crazy Wow That Looks So Different stuff and more invisible and less exciting things: “old” wiring ripped out and new wiring put in, recessed lighting re-aligned, plumbing adjusted and replaced, and window holes measured and cut. 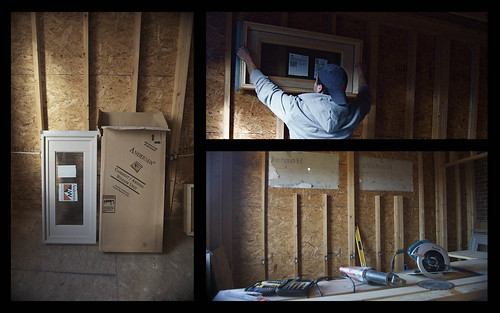 I found some awesome brand new transom windows at Community Forklift that I am using in the back bedroom at eye level. If you’re stranding tall, you will be able to see views out of them, but they’re meant to add a little bit of a modern feel while drawing in dappled sunlight.

There was one hiccup that stalled the project since the last update – the realization that I actually had a few more steps to complete with the bank before I could get the construction money. Although I had been totally approved for the money and the loan was closed on when I purchased the house, the fine print was that I needed to create a draw schedule with my contractor so that the bank had a way to regulate the disbursal of funds. That took a couple weeks to work out: schedule made, opened a new bank account in my LLC’s name, and gave the first big fat check to the contractor.

For those of you interested in how I got the loan in the first place, here are the Cliff’s Notes: approached Washington First Bank – because they are headquartered locally and deal with me like a human rather than a number, pitched my idea and included numbers and neighborhood development narratives, and found both an equity partner and a guarantor for the loan. Banks these days aren’t just giving money on whims, so they make sure to cover all their bases – but I ended up with a construction loan in one of the worst ever recessions. My suggestion – deal with local people. The 1-800 number name-brand banks don’t really care about you or the neighborhoods as much. 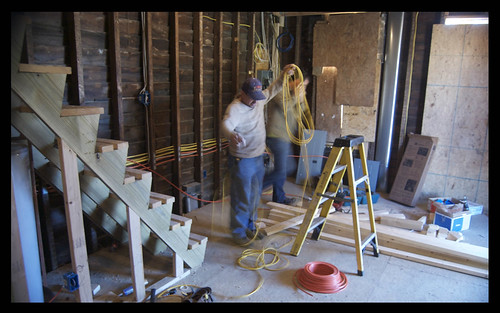 The new wiring is pretty gorgeous – neat lines and bright colors. When renovating an old house and are already opening walls and floors (okay, yes, this house essentially a brand new house in an old shell), I recommend redoing all the plumbing and electric if you can afford it. Definitely worth it considering it’s an investment against future nightmares.

Despite the sort-of slowdown, the project is still moving – and some excitingly visible things Are finally happening. From the exterior, the U Street House looks like a complete hodgepodge of stucco styles, and window sizes. It’s a cute little house, but it has some awkward features on the outside that I am going to try to unify through the use of windows, trims, and a new coat of stucco all around.  Continues after the jump. 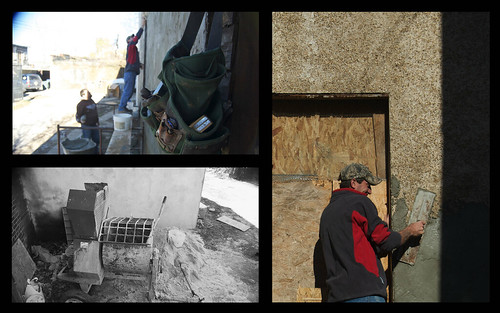 The stucco guys hard at work skimming a new scratch coat over the existing stucco. The end result will be a smooth coat, which will then be painted. I’ll probably end up going with a somewhat natural stone color with white trim and dark window sashes.

The windows will be all wood, two-over-two paned, double-insulated glass, and painted on both the inside and out. I think they are going to be one of my favorite features of the house. For the trim, which right now is nonexistent, I looked to other neighborhood houses from the same period, some of which have also been stuccoed over the years (the U Street House was once wood clapboard). Nothing too extravagant, but I’m a big fan of restoring detail to homes … too often in renovations or new construction details are covered in vinyl or stripped entirely to make way for what has become default. That is, whatever is cheapest at your closest big box hardware store. I’m not better than the big box (can’t beat the price), but you have to be creative to get period details and classic character from places that profit on quantity over quality. 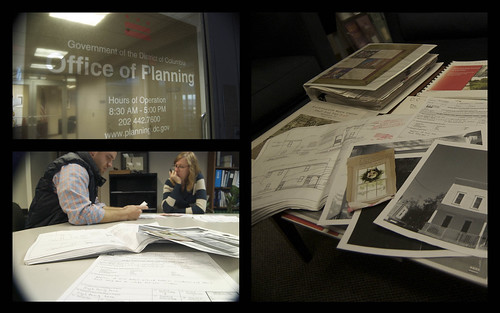 The Office of Planning is my friend. Left: Anne Brockett helps me with trim ideas. Right: my collection of inspiration photos (and even a cut-out from a Pottery Barn catalogue … it had the perfect example of window trim I want to use).

When I was renovating the house I live in now, I completely botched the window design. Most of the Anacostia neighborhood is a historic district, and even though I have been pouring over Preservation magazine, watching and reading This Old House, and aspiring to restoration greatness for at least the last ten years, I somehow had in my mind that as long as I used the right materials, the styles chosen didn’t matter as much. Error realized – kicking self subsided. So when I replaced all the windows on my 1933 Wardman-esque townhome, I ordered them in craftsman. I liked the look, but I didn’t go through the approvals process. Lots of hassle and new windows later, I am never Not asking all the right questions and consulting DC Historic Preservation again. 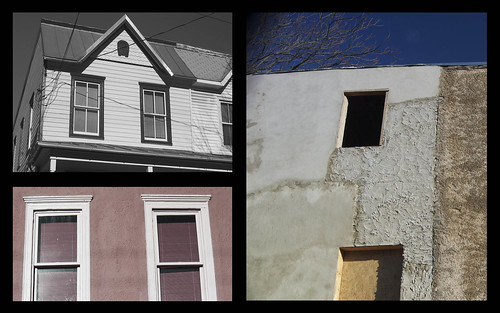 Clockwise from top left: a neighborhood house with the same windows and trim I am planning to use; The U Street House in all its stucco styles and its now naked window openings; another Anacostia window trim example, this time on a stucco house.

Enter Michael Beidler and Anne Brockett at HPO – who have been complete lifesavers. I knew the kinds of windows and doors and transoms and trims that I wanted for the U Street House but just didn’t know if they were the right kind / fit the time period of the house: Can I make the windows two-over-two instead of one-over-one? Can I add trimwork all around the windows instead of just using a brick mold? Shouldn’t this have all been figured out when the exterior plans were approved? Yes, but the original plans called for the most basic of renovations, and I want this house to look a little more authentic than that.

Michael (Senior Preservation Specialist at HPO and in charge of the Anacostia Historic District) and Anne (Architectural Historian) walked me through the process and helped me adjust the permit to reflect the added details. It was crucial that I adjusted my building permit to reflect the changes – otherwise, despite the fact that the changes are for the Better, I could get a big red stop work order. No, thanks. 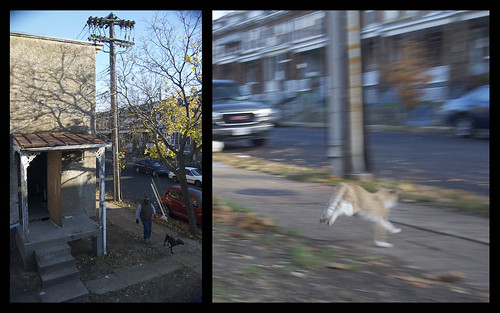 The U Street house is on a really great block. Dogwalkers, golden yellow fall leaves, and yes, even a stray cat or two.

I’ve also been busy designing the kitchen and bathrooms, but I’ll share more about those later. Until then, you can find me back here in a few weeks, on Twitter (@DG_rad), at my jobsites, or scurrying between Community Forklift and any number of inconveniently-located home supply stores. Peace.

[Note: if you are interested in purchasing this house or have a property you need renovated or flipped – email David at [email protected]]

END_OF_DOCUMENT_TOKEN_TO_BE_REPLACED

More Stories
Dear PoP – Cork and Fork no more on 14th Street NW or is it Just Confusing Signage?Random Reader Rant and/or Revel