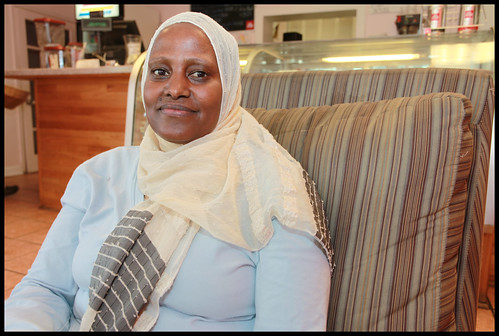 “In 1982, I came to America at sixteen as a refugee with four of my younger brothers and sisters. At that time, my Mom was in Saudi Arabia and my Dad had recently died. I had a sister in Egypt, a brother in a Djibouti refugee camp and another sister in Greece. The whole family was scattered and I was the oldest one here and had to care for my youngest siblings all by myself. When we first came here, there were almost no Ethiopians in Minnesota. When we told our relatives where we ended up, they said, ‘Where is Minnesota?’ Nobody even knew such a place existed. Of course, the winter started and it was very tough. We also had the language barrier as I barely spoke English. Back home, we learned English from Ethiopian, Indian, Chinese, and Vietnamese teachers. When I first had an American teacher, no one understood what he was saying! We were making fun of him all of the time. We thought he had such a funny accent.

“In Minnesota, we were sponsored by a woman who helped refugees as a business. Before us, she sponsored 40 Cubans and made a lot of money off of them. She was working for the Church of God, which has good intentions, but she was just corrupt. She sponsored people and the church gave her money, but she did not give it to us. She would seek out donations, things from the garbage and other cheap things and give them to us instead of buying us the things we needed. She put us in a bad neighborhood, although bad neighborhoods in Minnesota are not like the bad neighborhoods here. We had clothes, money and maids in Ethiopia. In our life, we never had used stuff. We didn’t want it. We were in America and expected a better life. But, that was how we were introduced to America. When we finally realized what was happening and told people, they looked into it, but nothing happened to that woman. Later on, one of her sons went on to be a professional football player and she became rich. I have to laugh about it now. What else can one do?

“As she didn’t help us, we met another Ethiopian who helped me and put my brothers and sisters in school. As I started to take on more and more responsibility over the family, it became harder to stay in school. Remember, I was sixteen. I eventually left school and took three jobs to support everyone. But, with three jobs, I didn’t save a penny! Most of my money went to phone calls as I needed to talk with everyone from Egypt to Greece to Saudi Arabia to Djibouti.

“With time, I found ways to bring my family to this country one-by-one. Everyone is in America now except for two of my siblings who are still in Africa. Finally, when everyone was here and I was 20, I went back to school to be a pilot. I graduated before I got all of my licenses and then had to get a job. I told myself that I would make some money and then come back to get my commercial pilots license, but that never happened. After school, I got a job with FedEx in Minnesota and worked from 5 a.m. to 9 p.m. as a manager. I had no time for anything else. In 1998, I transferred with my job to Washington, D.C. to be close to my two sisters who live here and to get away from the cold. When the opportunity came to leave my job and work in our family business, I jumped at it. In my life, I have worked enough for four people and needed a break! Now, my sister and I own Café Sureia in Brookland, which is named after my youngest sister. We make traditional American dishes, but add our Ethiopian spices to them. So, that’s the story of my life.”