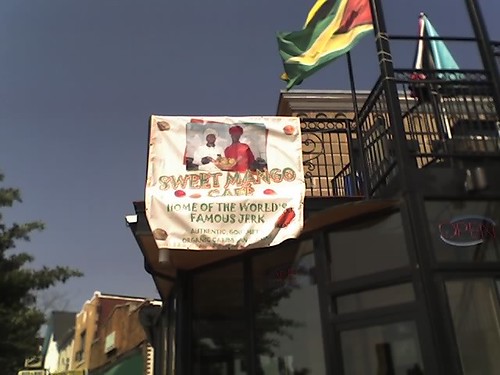 I picked up the attached notice of suspension from the Park View blog. Apparently, the shooting that occurred on Rock Creek Church Road on Saturday, December 5, 2009 was part of a scuffle that began in Sweet Mango Café. Sweet Mango has been a staple in the Petworth Community and a favored spot for jerk chicken in DC. Many of us have found it to be one of the few edible spots on Georgia Avenue. Still, as a result of the crime and other offenses that have occurred this year, Chief of Police Cathy Lanier has deemed the establishment an “imminent danger to the health and welfare of the community.” Based on her recommendation, DCRA has suspended the establishment’s liquor license pending a hearing to occur tomorrow.”

Wow this is crazy. Thanks to all who sent emails about this. You can read the full complaint below:

You really have to read the report, it is truly unbelievable. Basically, two patrons were kicked out, the shooting occurred and MPD found blood inside the vestibule of Sweet Mango while nobody from the establishment called the police. Additionally, they are accused of operating an illegal nightclub in the basement. Sweet Mango is located on New Hampshire Ave. across from the Petworth Metro.