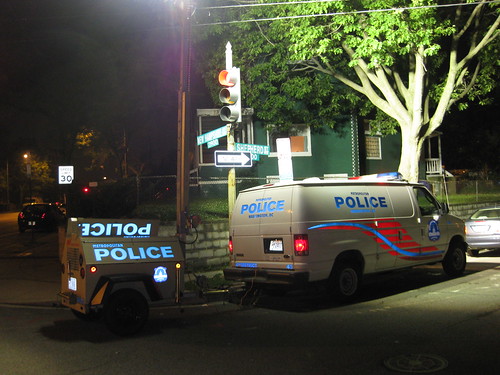 If you missed it, 3D commander Kishter announced three – count ’em three – immediate crime closing arrests tonight on the MPD 3D list serve. This is the type of proactive policing everyone says they want. While there’s know way of knowing if this is a trend or coincidence, it’s sure a great start for the Third Districts new Commander!”

Following are the three arrests from last night from MPD:

“At approximately 7 pm this evening a cab driver was robbed at Georgia Ave and Hobart Streets, Northwest.
After a swift police response by officers in the area a subject was stopped.
Subsequent to the stop the subject was identified as the suspect who committed the robbery and he was arrested.

At approximately 7:30 pm this evening a subject was observed by our plain clothes Tact unit break in to a car on the 1400 block of S Street,NW.
The Tact has been deployed to combat robberies and Theft from Autos.
After a brief foot pursuit the subject was apprehended and placed under arrest.

At approximately 9:15 pm a victim was robbed in the 2800 block of 15th Street, NW.
The robbery Tact unit who were in the area located a subject fitting the description that was provided by the victim. After a brief foot pursuit the suspect was located in the 1400 block of Fairmont Street, NW, and was arrested without incident.”