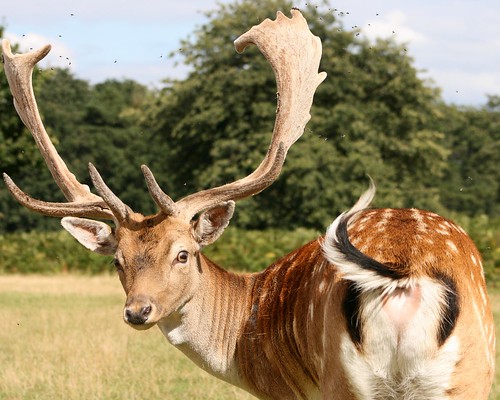 A little over two weeks ago I was driving a friend to Dulles and we had planned on making a couple of stops on our way out of town. The detour took us south on 23rd St NW and I had just started moving through an intersection at M St when “SMASH! TKWACK! AUUUGHHH!” A deer lunged from the east side of the street and tackled my car. The sounds were from the impact into the driver’s side, it’s body rumbling and rolling across the hood and myself and my friend screaming in shock and confusion. The deer survived the impact and bolted off towards Georgetown. Fortunately, all humans were also ok and my car sustained enough damage that the entire front needed to be replaced, but not so much that it was undrivable. There were some stragglers out and about that stopped to check on us and provide a play-by-play of the action and odds on the likelihood of survival of the deer, and one gentleman informed me that he had called the park service to complain about the deer and been told “it’s nature, there is nothing we can do about it,” a sentiment that I agree with in the park or out in the rolling hills of Western Maryland, but think is bullshit right next door to downtown. I had been noticing deer around a lot more frequently and wandering closer and closer to the road in Rock Creek Park and along bike rides past the Mormon Temple since late summer and have nearly been taken out by a large buck and a family of deer bolting across the road on more than one occasion. I am wondering if this is normal or if there is an over population problem in DC.

On a related note, I recently saw two articles in the Post about deer in the metro area. The first article was published this spring and discussed their adaptation to suburban living (http://www.washingtonpost.com/wp-dyn/content/article/2009/04/17/AR2009041702115.html). The second article covered protests from locals and animal rights activists who were opposing a bow hunt to cull the population in a couple of parks in Fairfax County. (http://www.washingtonpost.com/wp-dyn/content/article/2009/11/16/AR2009111603596.html) Personally I think deer are a tasty nuisance and it would be great fun to get Ted Nugent to schedule one of his hunting camps in the park like he did in Michigan to help reduce the Russian boar population.”

A few weeks ago a deer jumped into the lion’s den at the National Zoo. I remember when I used to drive seeing deer crossing Beach Drive all the time. I guess the question is – at what point do you think the deer population should be culled if ever?