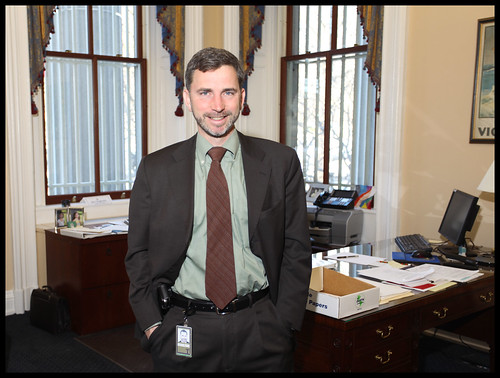 “I grew up in Auburn, Massachusetts. In 1991, I came to D.C. after graduate school as a Presidential Management Intern with the Office of Management and Budget. I thought that I would work here for a few years and then go back to Massachusetts. The longer I stayed, though, the more deeply routed I became. I met my wife here. We bought and renovated a house on Capitol Hill. We started a family here. Any notion of leaving got increasingly distant with time.

“Somewhere along the way, I got interested in this city itself and how to make it better. When Anthony Williams was appointed Chief Financial Officer for Washington, I was offered an opportunity to be a detailee in his office from my position in the U.S. Department of Transportation. When Mr. Williams became mayor, he asked if I would serve as CFO of the Police Department. Chief Ramsey had just come in from Chicago. There seemed to be so many exciting things going on at that time. With the Police Department, we were working on issues no less important than the safety of the citizens living in the nation’s capital. Still, I had no intention of staying with the city for longer than a few years. But, from the Police Department, I went to the D.C. Department of Transportation (DDOT), then Metro, and then became the City Administrator and Deputy Mayor. Now, I am back in the federal government as Treasury’s Assistant Secretary for Management, Chief Financial Officer, and Chief Performance Officer.

“One of the great stories from my time in the city is of the Circulator bus. Someone once described me as the father of the Circulator. I think that is an unfair description. There were so many people who had been working on this idea for a long time. There was the Museum Bus that cropped up in the 80’s then died, and the Blue Bus started by Ginger Latham, and the Georgetown Bid. The Blue Bus connected Georgetown and Dupont Circle. I mean, can you imagine two cooler destinations to go to and from? What was fascinating was that the bus served primarily workers in Georgetown. For them, the bus was a huge bonus because parking in Georgetown can be a nightmare and the transit connections can be unreliable. I used to joke that the bus schedule is a list of times that the bus will not come. This shuttle made it easy for people to get to work. The Blue Bus made it clear that there was a market for similar bus routes.

“At DDOT, we shifted our mentality from roads and moving goods and people to connecting places. The Circulator fit beautifully into that and Mayor Williams was a huge supporter of the idea, as were Councilmembers Jack Evans, Tommy Wells, Jim Graham, and others. Councilmember Carol Schwartz gave me a year to make it work. We found these beautiful Van Hool buses with big windows and three doors in Oakland that the city didn’t have the money to operate. We found some cash from an old settlement related to when trolley prices went from 5 to 10 cents and a bunch of riders sued and won the old assets of the Capital Transit Company. That money had been put in a bank and was sitting there for about 30 years. The only thing that money could be used for was bus service in the District of Columbia. We used that $11 million to buy 29 buses.

“The Circulator was what we called the project. We had focus groups to name the bus and tried things like the Go D.C., or D See, or one route would be Zip and the other Zap. Overwhelmingly, much to the horror of the brand people we brought in, people voted for the Circulator. They said, ‘But it is so bureaucratic.’ But, this is Washington and the answers people gave for why they liked the name Circulator was that it described what it does.

“People who had never ridden buses before were riding the Circulator. Polls showed that people liked that it came frequently and started and ended in places that people recognized. It was a model of what bus service could be. Since then, Metro went on to build some of their express routes and bring on much cooler-looking bus equipment. They also started NextBus to inform people about bus schedules, so people would have more faith in the bus system. Finding those ideas that are already sitting there like the Circulator and implementing them and finding ways of making things that people take for granted more interesting, those are the projects that I love working on.

“My time in the city was one adventure after another. The great thing about the city is that you need to deliver services every day. There is an old joke in municipal governance that a mayor runs for office every day because someone’s garbage needs to get picked up or someone needs to respond to a 911 call. That really focuses you and shows you that it is all about the outcomes and service delivery to the taxpayer. Trying to bring some of that focus to outcomes and the need for speed is what I am trying to bring to the federal government now.

“While I work for the Treasury, I will always stay connected with D.C. I still have so many friends who work for the city. People still stop me all the time to ask what I think about this and that. I just can’t not share my views. My life is here. My family is here. There is no way I could remove myself from D.C. life short of moving to Alaska. Even if I did that, I think that people would still call me there to see what I think about things happening here.”

More Stories
Pizza Hut Robbed on 1700 Block of Columbia Road, NWOne of My Favorite Buildings Gets a Facelift