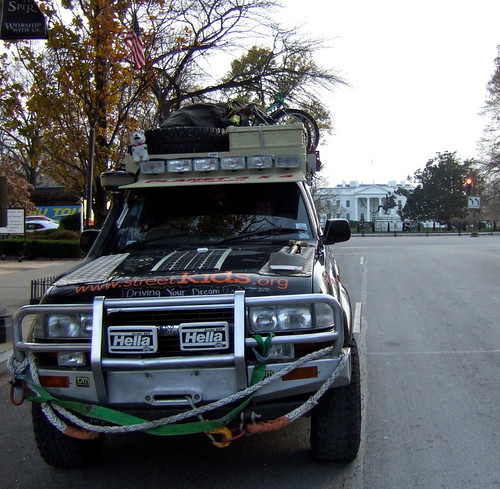 I first met Tim Dennis in August 2008 at the port of Vladivostok, Russia. I had just finished a month-long journey on the Trans-Siberian Railroad. Tim had spent the last several months driving his souped-up Toyota Landcruiser from Britain across Eastern Europe and Siberia on behalf of a charity called StreetKids International. Now he was trying to get to Japan to continue his journey. Between the two of us we were able to negotiate the paperwork to allow us to cross by ferry from Russia to Japan. I got to know Tim better while en route and extended him an open invitation to visit me in Washington, DC should he make it that far.

Now, 16 months later, after crossing the Pacific Ocean by ship, driving across Alaska, crossing the Arctic Circle, and transiting Canada, Tim has finally arrived in DC and taken me up on my offer of hospitality. The second part of his trip will be to the south, driving through North, Central, and South America, with Antarctica as a finish line. His home throughout this epic journey has been the same Toyota Landcruiser, now with over 300,000 miles on it.

Tim’s truck is truly a marvel of modern technology. It’s got an updated suspension system, an external air filter and compressor system, a roof rack, a Kevlar winch five times stronger than steel, and an ingenious fold-out tent on the roof. It also has a shower, a custom-fitted water heater, a rear cooking space, a backup fuel tank, a freezer, a refrigerator, four batteries, and a solar panel on the front hood, as well as dozens of other modifications and enhancements. The exterior is covered in decals from his sponsors and places he’s visited, as well as his mascot: an anthropomorphic rat named Dylan. Tim calls himself the “Rambling Rat.”

Tim was inspired to support StreetKids after seeing their label in a hat he bought. “The more I read about StreetKids, the more I realized that their projects matched some of my personal goals,” says Dennis, “So I decided to use my trip to raise awareness of their efforts.”

StreetKids supports underprivileged youth around the world by giving them training in business skills and health issues, so they can lead healthier and more successful lives. “Many youths supported through StreetKids have developed their own businesses, gotten off the streets, and even used the money they earn to go back to school,” says Dennis. (You can learn more about StreetKids on Tim’s website – www.RamblingRat.com)

Tim has also started his own projects while on his travels, including a youth skateboarding initiative in Canada. “Back in Britain,” says Dennis, “I had a home and my own business, but I didn’t feel like I was getting what I wanted out of life. Now that I’ve sold everything and am traveling to support these projects, I truly feel happier and freer than ever.”

For now, Tim’s enjoying his time in DC. “I really love this city,” he says, “I was surprised to see such lovely architecture and meet such warm, friendly people. Everyone I’ve met here is happy to listen to me talk about StreetKids. And the truck is definitely getting a lot of attention too!”