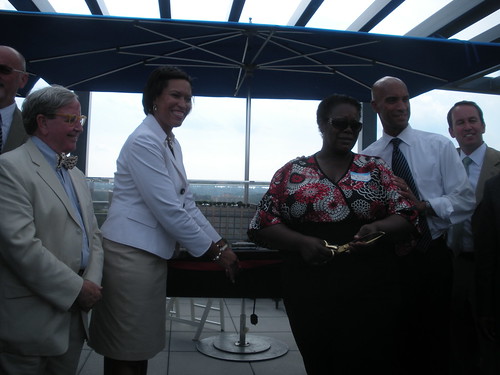 CM Bowser second from left
It was pointed out that it had been a while since I interviewed anyone from the Council. Last PoP Profile was At large Member Phil Mendelson back in Feb. Over the past month I have been in the works of setting up this interview and our schedules finally aligned late last week. I decided to focus my conversation with Council Member Muriel Bowser (D-Ward 4) on crime and economic development. The most important issue to many of us is crime so we will start there.

I first asked Bowser if she was supportive of Chief Lanier’s all hands on deck initiative, especially given the current lawsuit with MPD’s union. Bowser replied that she believes of course the labor issue needs to be resolved. Assuming that it will be Bowser replied, “I like all hands on deck because it provides great visibility in the community on a regular basis”. She gave an example of its usefulness the last time we had one a couple of weeks ago. She pointed out that resources were used to hand out fliers in the case of the La Casa Demorata Liquor store murder on Georgia Ave. in which an arrest was made last week. Furthermore the initiative allows officers to be highly visible in the community and “the more the police are in front of people in the neighborhood the better”.

I asked the Council Member if she supported the new transit stop safety zone legislation recently introduced in the Council. She mentioned that the Petworth metro was around the 28th most targeted metro and Takoma was around 21st. As such she supports the legislation but is looking forward to the hearings to determine whether or not stricter sentencing will prove to be an effective deterrent.

One of the popular catch phrases that we’ve heard from MPD is Community Policing. So I wanted to ask the CM what her definition of community policing was and whether or not she thought it was effective. She said most people think community policing is seeing officers walking the beat and then they get frustrated when they see MPD cars driving around. She explained that community policing is a bit more nuanced than simply foot patrols. She explained that in each Police Service Area (PSA) the Lieutenants are being empowered to respond directly to neighborhood concerns at community meetings. Therefore it is very helpful for the residents to let the police know about trouble spots in their community. I asked what else residents could do to be helpful and she mentioned that a pilot Neighborhood Watch Program (NWP) is starting up in Petworth. The NWP has proven very successful in the 2nd District. Currently in Petworth, Block Captains are being trained and will reach out to their entire block. The Block Captain will then liaise with MPD in order to make sure the residents concerns are addressed. The program actually covers a bit more than crime and also includes quality of life issues. IE if an alley needs repair, street lamps are out, or there are trash problems other DC agencies (like DDOT, DCRA etc) will be alerted on a monthly basis. After Petworth this program will spread to other neighborhoods in Ward 4.

The Council Member also mentioned that tools for an effective MPD need to be increased. I asked for an example and she explained that MPD will be getting its own Forensic lab (in South West) in the 2011/2012 time frame. Other tools that have been provided or are going to be provided include laptop computers in MPD cars as well as mobile finger printing stations for quicker identifications.

I asked the Council Member if she thought community meetings after high profile incidents were useful as I’ve often heard that folks find them rather frustrating. She explained that it is a difficult situation but that the meetings are important because it is necessary to convey accurate information to the community and identify next steps.

To conclude this section of the interview Bowser noted that closure rates in Ward 4 aren’t as high as in some other Wards but they are improving. “The number one goal of the police needs to be arresting the bad guys. This will be accomplished through good detective work and cooperation with the community”.

END_OF_DOCUMENT_TOKEN_TO_BE_REPLACED

More Stories
Strictly Scuttlebutt – Results Gym on U Street to be Replaced by another High End Gym in 2011Multiple Car Crashes at 13th and Girard Streets, NW on Nov. 13th