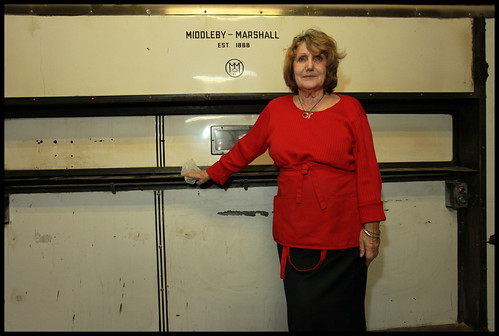 “I was born in France and came to the United States in 1960. I came because I had a sister in North Carolina who suffered a tragic accident. I ended up in Washington because I had a friend here. Thirty years ago, my husband and I bought the Catania Bakery. Neither my husband nor I were bakers, but Grace Caruso, the former owner, taught me everything I know. For the last thirty years, we kept the place just as they did. We still make Italian breads using Grace’s recipes and deliver them to restaurants around the District, Maryland and Virginia.

“Back in 1932 when the Catania Bakery opened, there were Italian stores all along North Capitol Street. This was an Italian neighborhood. The Carusos used a wood burning over and delivered traditional Italian breads door-to-door. Most of the community here was from Southern Italy so it was the bread they knew from home. The Caruso family came from Nicolosi, which was at the base of Mt. Etna. Catania, the name of this bakery, is the name of the province in Sicily where Nicolosi is. You know the Italians, they can’t live without their bread so this place was a staple of the neighborhood. Now, most of the Italians are no longer here, they either died or went down south, but a few of them are still around. This bakery is the last remnant of Italian life on North Capitol Street. The Italians living around here and coming by are mostly older people. The newer Italian generation is more Americanized, but they will still come in on holidays to get some of our bread because they grew up eating at this bakery. We also do events with the Knights of Columbus, the Holy Rosary, Catholic Churches, and we used to do the bread for the big Italian convention in DC.

“The neighborhood started changing after World War II and becoming less Italian. Due to a number of reasons, the neighborhood really got bad. When we first bought the place in the late 1970’s, I never came at night because the neighborhood was so dangerous. It got better, but it is still a very dangerous place. We have children, but they are not involved with the bakery. Because of this area, my husband was not keen on having our children or grandchildren come here. We’ve had a number of robberies, some of them were big time robberies. My granddaughter used to come down and spend Saturday’s here with me ever since she was three-years-old. But, she was here during a robbery and her parents wouldn’t let her come down anymore. Now, I am here by myself. Danger is still here. But, we have been here for a long time and will stay. We are resilient. The neighborhood is getting better, but that doesn’t mean the bad elements are gone. At night, you wouldn’t want to walk around by yourself, but, the neighborhood is slowly changing with new families. Because of that, on Saturday’s, I started making and selling croissants out of the bakery. That is my French addition to this old place. Otherwise, it is and will remain Italian. You know, after all of this time here, I feel more Italian than French!”