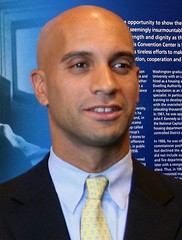 Fenty and his handlers were making their way up Rock Creek Church Rd from NH and GA Aves campaigning for his reelection. I got a knock on my door around 4pm (I work from home) and one of his handlers was there. He introduced himself and asked for my support and then called Fenty over who also asked for my support and shook my hand. It was one of those moments where I was caught off guard and could think of nothing to say to the mayor but nice to meet you. My question is isn’t it a bit early to be campaigning for reelection in 2010 when clearly there is a lot of work that Fenty could be taking care of on a Tuesday afternoon? With the rash of crime in the area I would prefer to see cops walking a beat rather than a politician. I guess that’s what I should have said to him… but like I said I was caught off card and a little celebrity struck.”

Given all the scandals he has been going through, I’d say it def. makes sense that he has begun campaigning. When I asked if folks thought he was doing a good job there were very few positive comments. He also has a pretty slick reelection Web site set up.

But what do you guys think – is it too early for Fenty to begin Door to Door campaigning?